We start another week with me gain another year on the old growth rings and as always, a new guest author interview. Today we meet science fiction and fantasy author James Traynor. 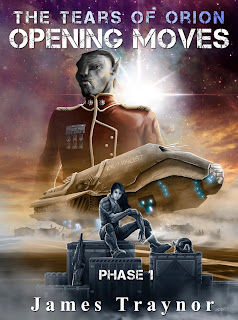 Please introduce yourself, who are you and what do you do?
Hi, I'm James Traynor, and I'm a life-long geek and scifi & fantasy afficionado. Writing, building worlds and creating characters have always been a passion of mine. When I'm not writing, I work for the logistics division of a large online retailer starting with the letter "A" in Europe.

What first inspired you to start writing?
I've always been fascinated with epic stories, with reading them, watching them, and trying my own hand at them. I read 'Lord of the Rings' for the first time when I was twelve. While my friends played 'Street Fighter' on their consoles, I was glued to my controller, experiencing 'Zelda'. This fascination with grand tales then followed me into my teens and beyond, with the great role-playing games on the PC and around my kitchen table. David Weber, Feist, Robert Jordan and later GRRM pretty much are what kept my interest in scifi and fantasy going, though they are far from the only influences.

I always had stories to tell. I suppose that's what started my role as a GM when I still was a teenager (which feels awefully long ago, by the way). Once that avenue ended after high school, I found myself on the internet, digging through various fantasy and scifi related forums. That must have been around the time the 'Lord of the Rings' movies were made. I got stuck in a few text-based forum RPGs and well, that restarted my writing ambitions. Over the following years my skills improved (I look back in horror at what I wrote fifteen years ago), and after writing and completing some fanfiction pieces I finally decided to give something that's truly my own a try. And here I am.

And what attracted you to science fiction?
Rockets. Aliens. Rayguns. Well, that was as a kid. When I got older got to appreciate the more complex issues a story and universe have to offer: the intrigue, the politics, how perception drives what people do, regardless of whether they are human or alien. Now? Ultimately, it's the idea of consequence. In scifi (and fantasy) actions matter, often widely so. Most other genres up to the late 1990s tended to discard the consequences of the events that happened. I found that to be notorious especially with (political) thrillers. With the exception of Clancy the most outrageous things could happen, and more often than not the world would have been completely resetted with the next novel. Scifi instead offers a wide open playing field.

Who is your favourite author and why?
Hard to say, as I've found myself enjoying the works of lots of different authors writing different styles. From a purely worldbuilding perspective, who sticks out for me would by David Weber with his 'Honor Harrington' series. The plot is hit and miss, but the universe he has created is fascinating. A big shout-out goes to GRRM for what he has done for the fantasy genre, giving it a more mature touch. Going back to the classics, Raymond Chandler for his characters and the atmosphere he achieves to create.

What do you find most rewarding about writing?
There's nothing like the experience of seeing a plot come together or realizing that your universe is coming to life. Though the most humbling experience has to be to receive positive reader feedback. If you've entertained and interested someone from halfway across the world enough for that person to write you, you know you're on the right track.

And the most challenging?
To keep writing! I have the attention span of a cat chasing a laser pointer. Sites like Wikipedia or TvTropes are like poison for me.

If you could spend a day with anyone from history, who would it be?
If I had to chose I'd either pick Adolf Hitler or Churchill. Both are wildly different but equally fascinating personalities I'd like to gain some personal insight into.

What are you working on at the moment?
I'm working on the sequel to 'The Tears of Orion: Opening Moves', which is called 'The Long Road'. Between that and my dayjob I'm also writing a short story in the same universe, set on Mars.

As Samantha Lee and her squad of elite soldiers embark on what everybody believes to be a routine patrol mission along the borders of Union space, she's certain she'll be back home with her family on Mars for Christmas.

At the same time, Tarek Winters and the motley human and alien crew of the freighter IRON MAIDEN take on a job a thousand lightyears away from Earth, expecting it to be an easy and profitable run.

But a war is coming.

The three human superpowers watch each other warily from behind vast fleets while plotting to take control of key colonies and trade routes. The great Rasenni Empire, once the unchallenged master of known space, is in decline, ensnared in debauchery and beset by old and new enemies. Pirates, raiders, and slavers run rampant on the fringes of civilized space.

For Corr'tane of the Ashani Dominion has set out to guarantee his people's survival - even if the cost is a war that will drown known space in blood...

You can find it in a format of your choice here or directly via Amazon.

The Tears of Orion is available from Amazon
Posted by Michael Brookes at 11:32