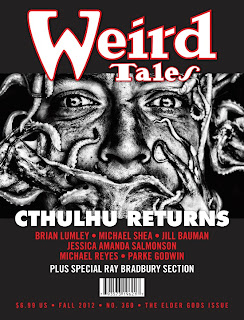 Weird Tales is one of the institutions of horror stories, many of the greats started their careers with stories published in this magazine. To be fair I didn't realise it was still going until I was contacted and asked if I would review the two latest issues. Well I've just finished reading the first of those issues number 360 and it's right up my street.

Issue 360 focuses on Lovecraft's Chthulu Mythos with some excellent stories and interesting articles. There's a decent mix of established writers and not so well known ones. They were all good reads, but three of them stood out for me.

The first was the lead story 'The Long Last Night' by Brian Lumley. This is set in a near future London where the world has been taken over the Elder Gods. It tells the story of a man seeking revenge for the atrocities committed against his family. It also paints a vivid picture of a world transformed by creatures beyond our understanding. An excellent tale.

'The Runners Beyond the Wall' by Darrell Schweitzer is a more traditional story and feels very grounded in the world that Lovecraft wrote about. In this story a young boy survives a terrible tragedy and becomes adopted by a strange aristocrat, who is a master of the dark arts.

My third favourite story was 'The Thing in the Cellar' by William Blake Smith. This story took a more humorous angle on the mythos, with a young boy discovery a creature of quivering malevolence in his cellar. The style of the writing fits the story well and the amusement of it made it a joy to read.

There's plenty of content in the magazine, mostly stories, but with the odd poem and some cool artwork scattered through. The article about the history of Dagon was also an interesting read.

You can find out more about Weird Tales on their website: