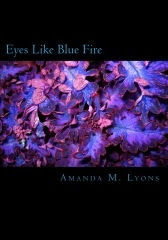 Please introduce yourself, who are you and what do you do?
My name is Amanda M. Lyons. I'm a writer and mom of two living in rural Ohio with my fiance.

What first inspired you to start writing?
I was always the little kid who told stories and made up games to play on my own. I also ate up books by the pile. Putting those two things together just seemed to be the natural progression when I was a teenager. It probably helps that I had looked up to writer like Poe and Stephen King since I was small.

And what attracts you to the darker side of literature?
I grew up watching horror and b movies. My mom was a fan of the big monster flicks and my dad liked the more out there stuff. I knew about Stephen King from his movies and I'd seen his books at the library often enough. He acted as a gateway to so many other authors H.P. Lovecraft, Clive Barker, Shirley Jackson, etc. While the movies could give me great visuals the books and stories gave me more detail, made my imagination create something a movie just can't. I respected that especially considering I was a pretty scared little kid.

If you could write anybody's biography, whose would it be?
Gary Braunbeck. I love how emotional his work is and I think it would be interesting to discover more about him while also drawing more attention to his work.

What is your favourite song lyric?
Hey but I don't care
Cause sometimes
I said sometimes
I hear my voice
And it's been here
Silent All These Years

What do you enjoy most about writing?
Creating something out of nothing. Watching the words build up on a screen gives me a sense of satisfaction and joy that few other things in my life do.

And the least?
Editing or at least the more tedious parts of it like correcting grammar. Also the self promotion aspects make me stand up and sell myself as a person, that's pretty hard for a person who's not used to telling people how great I am. I was always shy. That's another reason I became a writer. It was easier to write what I wanted to say than it was to say it.

What are you working on at the moment?
Mostly promotion for Eyes Like Blue Fire but I also have a few other books in the works. A sequel to ELBF for one. A novel about a girl with dolls. An apocalypse novel about a writer that writes the world to its end and then tries to save it. A novel about a couple who own a farm where things go very wrong. Also a book about a mom and her son facing the loss of her baby and finding themselves in another world. I just have to see which one wants my attention next. The apocalypse one is closest to having a first draft.

Tell us about your latest work and how we can find out more.
Eyes Like Blue Fire, a gothic horror novel, is the story of Katja a vampire who has lost sense of herself and her value in the world. Lost, broken and damaged she wanders the streets of Europe hoping to find some sense of purpose beyond the death and tragedy she has always known. Betrayed by her sire and left alone in the night she is startled to discover herself forming a connection to a young man who shares a close resemblance to her master and lover. Though everything in her begs her to stay with him she flees only to come running back to save him when a sadistic monster from her sire's past comes to destroy the only hope she has had in 300 years. It can be purchased in both paperback and Kindle formats from Amazon.