Last December I first interviewed Larry Garner (Animal to his friends), you can read his original interview here. Today we catch up with Larry and see what he's been up to since then. 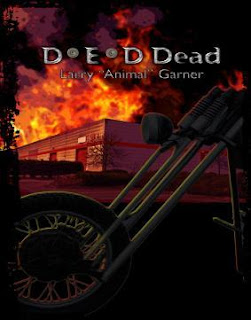 What has changed in your life since we last spoke?
My novel D-E-D, DEAD was named a finalist (one of three) in the Colorado Book Awards, in the Crime/Mystery category. The CBA's are awarded by the Colorado Humanities' Center for the Book, which is affiliated with the Library of Congress.

I have also been invited to many reading/signing events in the last few months. The book is getting good reviews and I'm very happy with the response.

Have you learnt any new wisdom?
The main thing I've been reminded of is that others aren't nearly as excited about my writing as I am. :) I have learned to accept the fact that the majority of readers don't leave a review of every book they read.

Have you become a better writer? If so, how?
I believe anyone who pays attention will become a better writer, even if the changes are unintentional. Just the act of interacting with readers and other writers causes me to mentally file away information and observances that ring a bell with me.

In my case, as a new author, I have had to accept that many things I wrote into my first novel, while amusing and/or pertinent to the story, were viewed by some readers as unnecessary or distracting.
My new novel will hopefully be tighter, even though I plan to write in the same "voice" which makes some details and actions unavoidable.

What are you working on at the moment?
As I work a full-time job and also have some other obligations, I am just now starting my next novel. I had consciously decided to not end the first novel in a manner that invited a sequel, as I wanted to write a different book altogether, but nearly all of the people who have read the book want a sequel. Something about the characters has struck a chord and the readers want more of them. The novel I'm starting will be set in southern Colorado, a few years after the last novel's timeframe. Many of the main cast of characters will be present, but some may have changed in significant ways. There will still be plenty of action, as well as a heaping dose of my twisted humor, so hopefully the readers who encourage me to keep writing will enjoy it.

Tell us about your latest release and how we can find out more.
D-E-D, DEAD is the story of a man who realizes he can no longer be a part of the motorcycle club he has belonged to for over ten years, due to their continued manufacture and sale of methamphetamine and their use of gullible young women in their topless bars and prostitution business.

He comes up with a plan to severely cripple their dealings, but knows he will be running for his life. While in hiding, he makes a discovery that takes his crusade to a new level, with the help of an old Navy buddy and some locals.

One of the recruits is an attractive, competent woman who turns out to be smarter than the guys with a few dark secrets of her own. The "good guys" aren't that good, but they're determined to stop the club's dope and prostitution from hurting any more of their friends and neighbors.

While the cover shows a motorcycle front wheel, and the protagonist is in a motorcycle club, the story really isn't about motorcycling. It is more of a study in greed, betrayal, loyalty, revenge, family, and redemption.

It is available at Amazon as a trade paperback or as a Kindle file. It is also available from Barnes and Noble or really any bookseller through Putnam. I have donated many copies to libraries in my area, and libraries can also find it through Putnam.

My website is http://larryanimalgarner.com and the novel is available there at a discount. I sincerely appreciate any and all correspondence from readers and other writers.

D-E-D, Dead is available from Amazon
Posted by Michael Brookes at 13:50