Welcome to the first day of the Blogger Book Fair, all over the Internet blogs are celebrating books from July 22nd until July 26th.

Here on The Cult of Me we're joining in the fun! We start the proceedings with a guest post from Noree Cosper comparing the story of Dracula in novel and film.

Prescription for Delirium is a world built on several mythos, one of the most prevalent being Dracula. I have the descendants of Abraham Van Helsing in the story after all. So, let’s do a comparison of the novel Dracula and Francis Ford Coppola’s movie version. I’m sticking to one movie because there have been so many and we would be here all day. Plus, I grew up on this one. Here are the basic characters.


Novel: The book was written as a series of journal entries and newspaper posts so Dracula is seen through the eyes of the other characters, mostly Jonathon Harker. When first introduced, Dracula dons an air of cordiality, welcoming Harker into his home. He is very passionate about his warrior heritage. He speaks of his pride in how the Szekely people are infuse with the blood of heroes and he claims to admire the British Empire and its people. However, in truth Dracula is prone to fly into fits of rage and he holds quite a grudge. In fact, it wasn’t love that caused him to target Mina. It was vengeance against Abraham Van Helsing and the others for hunting him.


Movie: Dracula was played by Gary Oldman. He is still a passionate man, er vampire, though you see this more through his hatred directed towards God. You can still see hgis vindictive nature in his actions against Lucy Westerna. However, you also see more of his seductive and romantic side since the story focuses on his love for Mina.  Coppola also gives you a side to sympathize with and there is a lot more depth in this Dracula rather than the novel. (I know it’s a strange turn.)


Harker is pretty much the same in both book and the movie, though you see more of his personality in the book. This may be because Keanu Reeves was cast in this role. He travels to Transylvania as a solicitor to act as a real estate agent for Count Dracula. In both Dracula welcomes him in but keeps him a prisoner to die to his brides once he’s outlived his usefulness. Harker manages to escape and join the others in their hunt. In the book, you do see his distress over Mina becoming a vampire more than the movie.


Novel: I think I like Mina more from the book. She is a school mistress and a proper Victorian lady, but she is intelligent. After Lucy’s death and the hunt for Dracula begins, it’s Lucy who compiles the clues together to help find him. It’s also Mina’s idea for Van Helsing to hypnotize her and learn what Dracula plans after she is bitten.


Movie: Copolla really focuses on the star-crossed romance between Mina and Dracula, which wasn’t in the novel. This was actually taken from a tale of Vlad Tepes’s first wife. He name wasn’t know but she did commit suicide.  The following is the oral narrative from the village of Aref (as found here):


"It is said that Vlad the Impaler had a kind and humble wife with a heart of gold. Whenever Vlad took his sword and led his army into battle, his wife's heart grew sad. One night a strange thing happened. An arrow entered through one of the windows of the fortress and put out a candle in their bedroom. Striking a light, she discovered a letter in the point of the arrow which said that the fortress was surrounded by the Turks. Approaching the window she saw many flickering fires in the valley. Thinking that all was lost, and without waiting for her husband's decision, she climbed up on the wall of the fortress and threw herself into the Argeş River."


So, back to Wynona Ryder’s portrayal. This Mina became obsessed with the love of her past life and it felt more like she was marrying Harker out of duty. She welcome Dracula’s embrace and only in the end did she realize she had to give him peace.


Novel: Van Helsing is called by Dr. Seward of his knowledge in obscure diseases. In fact, his knowledge of hunting vampires is downplayed until after Lucy’s death. It seems to only things he’s read about in books.


Movie: Played by Anthony Hopkins, he is portrayed as more experienced in hunting and comes off as a little eccentric. He becomes excited when he deduces that Dracula is the fiend plaguing London.


Novel: Poor Lucy, always the victim. She is praised for her beauty, purity, and sweet nature. She is proposed to by Quincey Morris, Dr. John Seward, and Arthur Holmwood on the same day, but it’s Arthur’s that she accepts. Lucy suffers from sleepwalking which leads her away from the safety of her bed and into the night where Dracula feeds upon on her. Her growing anemia worries her loved ones and they call Dr. Van Helsing. Still, they are unable to save her and she becomes a vampire. She is killed by Holmwood with the help of Van Helsing, Quincey, and Dr. Seward.


Movie: Lucy is eroticized, often becoming bold and referring to sexual innuendos.  Her sexual tendencies are her downfall as she is seduced and raped by Dracula which leads to her transformation to a vampire.


Novel: Dr. Seward is the administrator of an asylum near Carfax. He is in love with Lucy but is turned down when he proposes to her. He remains devoted to her and vows to destroy Dracula along with his best friends and rivals, Quincey Morris and Arthur Holmwood.


Movie: He is still a doctor, though he is named Jack instead of John. Also, it shows he’s a drug user.


So he’s pretty much the same in the book and movie. A rich American from Texas, Quincey describes himself as a teller of tall tales and a “rough fellow, who hasn’t perhaps lived as a man should.” He’s best friends with his rivals for Lucy’s love. Though she refuses his proposal, she continues to love her. Quincey is mortally wounded in the final battle against Dracula. Jonathon and Mina Harker name their son after him in honor of his sacrifice.


Arthur is engaged to Lucy Westerna and best friends with his rivals. He is the one who stakes Lucy after she becomes a vampire. He is pretty much the same in both except during the story in the book, his father dies and he succeeds him as Lord Godalming. This shows him to become less emotional.


Novel: A lunatic in Dr. Seward’s asylum, he falls under Dracula’s power and helps him. He has an attack of conscience when meeting Mina and tries to fight Dracula. He is mortally wounded and dies after revealing the truth to hunters.


Movies: Renfield is Harker’s predecessor and is driven made under Dracula’s influence.

A Prescription for Delirium 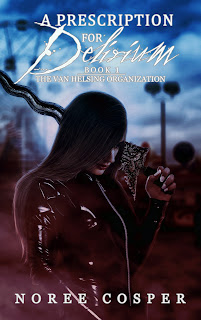 Ninety years ago, Gabriella di Luca promised to protect the family of her dying lover. She failed to keep that promise.  She was too far away to stop the devil that murdered the eldest Van Helsing son. Years later, Gabby learns the devil has resurfaced. She arrives in Hampton, TX, determined to stop the devil before it can lay a bloody hand on the remaining three brothers.

However, madness is spreading through Hampton. She suspects the devil is using this madness to test a drug which has a side effect of demonic possession.  Gabby rushes to end the source of the madness only to fall victim to it. For a woman cursed with eternal life, dying is no threat. However, Gabby must stop the devil's plot or risk losing her most precious possession: her mind.

A Prescription for Delirium is free during the Blogger Book Fair, July 22nd-26th! 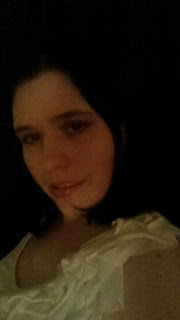 Noree Cosper loves writing about magic in the modern world. While growing up in Texas she constantly searched for mystical elements in the mundane. She buried her nose in both fiction and books about Wicca, Religion, and Mythology. Everyday became an adventure as she joined a group of role-players, acting out her fantasies of vampires, demons, and monsters living in the world.


She embraced her nerdom wholeheartedly.


Noree grew, but never left her love for fantasy and horror. Her dreams pushed her and her hand itched to write the visions she saw. So, with her fingers on the keys, she did what her heart had been telling her to do since childhood. She wrote.