Back in December I interviewed Alex Roddie, you can read what he had to say here. I've caught up with him to see what he's been doing since then, find out more below:

What has changed in your life since we last spoke?
In late December last year I was just starting to get to grips with the ins and outs of being an author. Six months later I have seen good months and bad, and have started to gain an impression about how to keep things going in the long term. I think in general I've been extremely fortunate: The Only Genuine Jones has got off to a good start, with well over 600 copies sold, and a small but very enthusiastic following of fans.

The paperback edition was published in February this year and set loose into the wild at a launch party at the Clachaig Inn, Glencoe. The launch was a great success and the presence of an illustrated paperback has given the book a huge boost.

My long-term goal is still the same: to become synonymous with my genre. Very few authors are writing fiction closely connected with mountain heritage and culture, and I believe my unique selling points have contributed to the modest success I've experienced so far.

Have you learnt any new wisdom?
Plenty! Perhaps the most significant lesson I've learned over the last six months is that authors can never stand still. The book market is constantly shifting, and if we don't adapt our tactics then we risk being wiped out. I have experimented with different price points and different promotional tactics although I'm well aware I haven't tried everything yet.

A slow sales spell last month also forced me to realise that, no matter how many good months you have, no author is immune to a sales slump.

I am also struggling with the balance that all authors must find between creating new stories and promoting their old ones. Something I've found really useful is timetabling my spare time and being very strict with myself when it comes to writing.

Have you become a better writer? If so, how?
I'm always trying to improve as a writer. I think my main area of improvement over the last few months has been knowledge of my subject. In my quest to understand the 19th century I've read as broadly as I can, studying everything from the rise of Bonaparte to the Romantic artistic movement, from sewage renovations in London to the revolutions of 1848. This is of course a never-ending task but I've already noticed huge improvements in my writing. I feel more able to inhabit the world of my characters and the language of the period comes far more naturally now.

Another trend which will yield benefits over the long term is a gradual, gentle shift in genre. The Only Genuine Jones was always historical fiction first and foremost, but (thanks to my marketing I suspect) it has become typecast as a climbing book. I believe this has restricted its appeal. Future projects are being tailored to appeal to a more general audience - without losing the strong inspiration from mountain culture that remains part of my DNA as an author.

What are you working on at the moment?
At the time of our last interview I was working on Alpine Dawn, an ambitious novel chronicling the very early years of Alpine exploration in the late 1840s. This has been suspended while I work on a new project, The Forbes Challenge, now nearing completion.

Tell us about your latest release and how we can find out more. 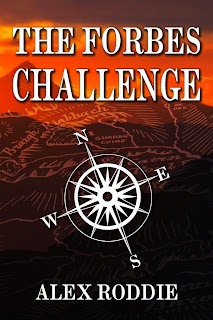 The Forbes Challenge is a slight departure from my existing work. Set in 1847, the story follows an adventure taking place in the Cairngorm mountains of Scotland and introduces the character of James Forbes. Forbes is the world's leading authority on glaciers and a noted mountain explorer who, five years previously, conducted an epic voyage throughout the Alps and literally wrote the book on Alpine glaciers. He suffers from chronic illness brought on by overwork, and now he is obsessed by the idea that a glacier has somehow survived in the unmapped Scottish mountains. The voyage north from Blair Atholl will prove to be one of the most testing of his life.

His journey into the heart of the Cairngorms is hindered at every stage by the machinations of the Duke of Atholl, a landowner infamous for hunting down poachers and trespassers. When Queen Victoria and Prince Albert visit the Duke's castle for their summer holiday things really start getting interesting!

I anticipate a late summer / early autumn release for The Forbes Challenge, which will be a long novella or short novel, depending on your definitions. You can read an overview of the characters in this new project here: http://www.alexroddie.com/2013/07/character-gallery-for-forbes-challenge.html

Click on images to view books
Posted by Michael Brookes at 13:12