Book Impressions - If Only for a Moment by Lyn Wildwood

If Only for a Moment is the story of man in an asylum who experiences blackouts and during these blackouts becomes a different person. The asylum's director changes and with new leadership the asylum becomes a place of terror as experiments are performed on the patients. Cole discovers a journal that tells of an alternate reality where similar events are taking place.

I like the story, unfortunately the implementation has a few issues. The switching between realities was sometimes confusing, now that may be deliberate, but it doesn't help the story flow if you have to re-read a section to figure out what was going on. The action sequences were also a little too pat, the hero dives in and easily takes out armed guards without breaking a sweat. He has no training and has been a patient for months. A minor point, but it broke my suspension of disbelief.

More serious was the set up of the takeover. It seems difficult to believe that such a regime where staff and patients are being held by the hospital, without any investigation. I understand that this was key to the story, but some extra details could have made this more plausible.

Now don't get me wrong, this isn't a bad book by any means. There are glimpses of real talent in the writing and with a bit more work on the details this would have been an excellent read. It is however still a good read and I look forward to seeing how this author develops. 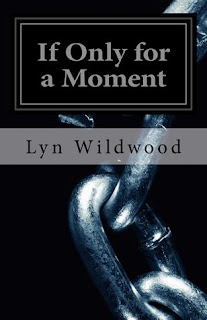 When Cole White is diagnosed with dissociative disorder, he thought the illness would be the worst of his troubles. But when he finds the journal of a former patient in his room at Woodsland Asylum, he realizes that things could get much worse.The journal belonged to a man named Derek Lach. Derek's journal describes how the asylum becomes after a change in leadership. The new leader puts the asylum on lockdown. No one is allowed out. Not the patients. Not even the staff. The new leader begins using the patients as lab rats, experimenting on them while neglecting to care for them properly.The journal depicts a nightmare, but suddenly Cole begins to have dreams that are in Derek's point of view. Shortly after, events that Derek described in the journal begin to happen in Cole's life. He too experiences a change in leadership at Woodsland Asylum that brings tyranny and oppression.

If Only for a Moment is available from Amazon

Posted by Michael Brookes at 09:43