This is a fun sequel to the original film, unfortunately it isn't as good, but still worth a watch. The story remains the same, a group of people find themselves trapped in a maze of rooms. Again the rooms contain some fiendish traps that provide the same visceral splendour as the first film.

Like the first film it's the characters that provide the suspense and help reveal the mystery of their situation. The main difference to the first film is the cube itself, it is slick development from the first maze, and brings with it some cool traps and effects.

Overall it's an ok watch, however if you haven't seen the original then make sure to watch that first. 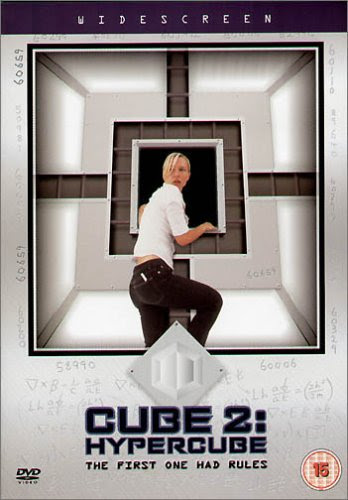 The sequel to 'The Cube', this film finds eight strangers trapped in a cube-shaped room, with none of them knowing how or why they are there. Trapped in this cube shaped room, where the rules of physics appear not to apply, the group must find a way out of the constantly shape-shifting environment before it is too late.

Buy Cube 2 now from Amazon (it's worth a watch)
Posted by Michael Brookes at 13:53