Let's get the fact that the film is nothing like the book out of the way. It's not, but that doesn't matter, it's a fine film in it's own right. It's silly, it's over the top, it's full of plot holes, but none of that matters.

Simply put Starship Troopers is great fun to watch. The action is great, there's some relationship stuff in there just to help the pacing. For its time it's quite a gory and violent film. For me the highlights aren't necessarily the main story, but the Federal Network interludes which add a lot of character to the film.

Great fun to watch, but don't bother with the sequels (although the third is almost watchable). 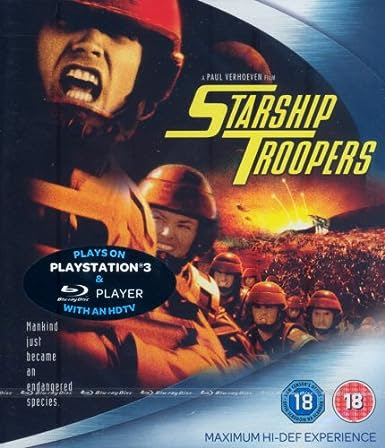 In the future, mankind has been invaded by a lethal alien bug race, thirty feet tall and possessing the ability to fly. Freedom fighter Johnny Rico sets about training up an elite military unit in order to combat the alien invaders, while his girlfriend, Carmen, becomes a fighter pilot. However, in the heat of battle, Johnny is unaware that Carmen is being seduced by her dashing flight instructor.

Buy Starship Troopers now from Amazon (and why not it's a fun watch!)

Posted by Michael Brookes at 14:51