New Drabble - The Dreams of the Dead

It's been a while since I last wrote a drabble (a story that is exactly 100 words long), but inspiration recently hit me with this one :-)

The Dreams of the Dead

I dream the dreams of the dead. The constant hunger for the luminous vibrancy of life burns and subsumes all capacity for reason or feeling. We exist alongside the living world, but it’s shadowed by the veil of our passing.

Our grey existence is eternal, and our hope is singular.

An explosion of light shatters the gloom. A rainbow in human form cast into a glowing shockwave passes through those nearby. For that moment, we glory in the life of the newly departed. All too soon the sensation fades, and our existence is grey once more.

And it sustains me.

You can read some of my other drabbles here: http://thecultofme.blogspot.co.uk/p/100-word-stories.html
Posted by Michael Brookes at 07:29 No comments:

I'm very pleased to announce that the forthcoming Best of British Science Fiction 2016 is now available to pre-order on Kindle. I'm honoured to have a story featured in this collection! 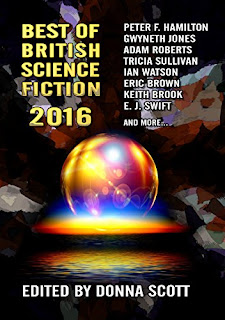 Fifteen seconds after his awakening Seb worries about what the Visitors intend from his educatio0n: