I'm saying this more and more these days, but this isn't my regular type of read. It's a procedural crime thriller about some deaths being caused by people who are supposed to be dead. As I say, it's not my usual read, but the story kept me hooked from beginning to end.

My only slight downside was that I found it a little predictable, but I get that a lot and it shouldn't put you off. The story is well constructed and the pace builds nicely to a satisfying conclusion. The investigation itself has suitable twists and turns to keep you guessing. I would have expected a bit more fallout from the end, but that's no big thing.

The writing itself is good and the author knows how to write a good action scene. I also enjoyed some of the more technical details, nicely integrated and not confusing. If you enjoy crime novels then this is well worth a look. 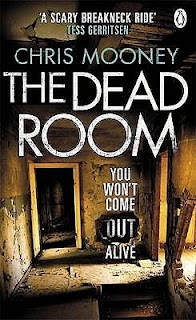 A mother and her son have been executed in their home and fingerprint matches show their attacker died twenty years ago. But how can dead serial killers return to haunt the present? The answers lie in the darkest shadows of The Dead Room.

When CSI Darby McCormick is called to the crime scene, it's one of the most gruesome she's ever seen. But the forensic evidence is even more disturbing: someone watched the murder unfold from the woodland behind the house - and the killer died in a shoot-out two decades earlier.

The deeper Darby digs, the more horrors come to light. Her prime suspect is revealed as a serial killer on an enormous scale, with a past that's even more shocking than his crimes, thanks to a long-held secret that could rock Boston's law enforcement to its core.

Is it possible to steal an identity? Or are dead men walking in Darby's footsteps? The line between the living and the dead has never been finer.