Creep is a fairly decent low budget British horror movie. A young woman takes the last train and finds herself trapped in an underground train station after being attacked. She is then stalked by a mysterious who is killing everyone she encounters.

It's a good watch, the suspense builds nicely. It does suffer from some dodgy acting and stupid decision syndrome, which is a shame as the rest of the film is very well done. It balances the gore and the creepiness well, in some ways it reminds me of The Descent, but not as good.

It has a similar claustrophobic feel and using the underground as a setting works well. The loneliness of it adds to the film. Well worth a watch. 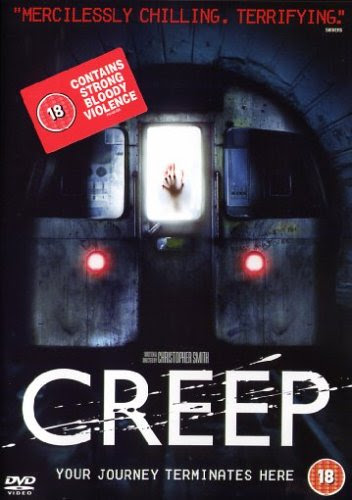 Gruesome horror set on the London Underground. Unable to find a taxi, Kate (Franka Potente) heads for the Underground and waits for the last train. She falls asleep and when she wakes, everyone has gone. She panics until another train pulls in. She gets on the train, unnerved that she's the only passenger but relieved to be on her way. Halfway through the tunnel the train jerks to a violent halt. The lights shut off and the train is plunged into darkness. Kate is trapped, in the dark and she is not alone.

Creep is available from Amazon