Up front let me say that I was given a free copy of this book in exchange for an honest review, here is that review:

Neogothic is a fantasy tale that weaves many fantastical elements like dragons, faeries and demons into the world we know. The story concerns a man who has experienced a pretty rough life and how he gets involved in a world most people aren't aware of.

The story itself is fast paced, a little bit too much so in my opinion. There's a lot of new and strange ideas being thrown around and it would have been nice to let them settle in before throwing the next idea at the reader. It's not a major issue though. The creation myth is well done and probably the highlight of the story.

It's a fun book which I enjoyed reading. 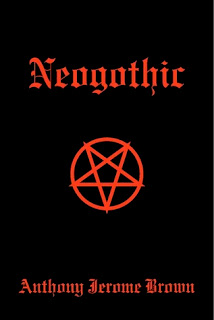 In Neogothic, a Fantasy novella, Rob, a recovering addict turned counselor falls - yet again - into shadow...as New York's underworld surfaces at the nexus of three planes of existence...and a DemonLord is pitted against an alliance of humans and Belladoran races - fairies, elves, halflings, dwarves and dragons - in possession of a powerful malevolent relic...and they bet their lives the horrendous maw of malice will self-devour.

Posted by Michael Brookes at 19:33