In this week's Tuesday Tease we feature an excerpt from David Wailing's excellent collection of linked stories 'Auto': 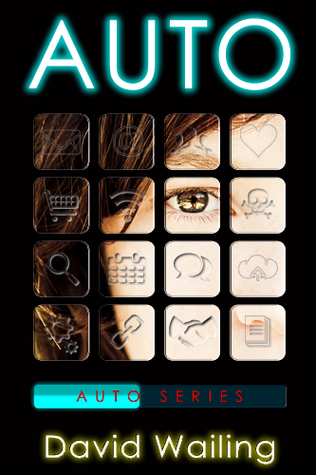 The cemetery grounds are wide and green, making her feel like she’s in the country rather than a suburb of London. Janine walks beneath tall trees, along lines of bushes and flowers, past statues on plinths. There are memorials of every kind here. Rows of small white stone markers, names etched on brass plates. Wooden benches marked with golden plaques. And of course the gravestones, jutting up from the grassy fields, equally spaced in neat rows as if in military formation. There’s a sense of great age and decay, with some of the stonework crumbling or mouldy, but fresh wreaths and flowers add spots of colour. Janine breathes in the summery air.
She notices there’s not much open space left in Enfield Cemetery now, but then it’s rare that people are buried nowadays. It’s always been that way for the Kinglake family, though. Janine has a lot of aunts and uncles here, North Londoners all. Not that they were great churchgoers, just traditionalists, from a time when burial was the proper way to do things.
After a while, she walks off the path and across grass, threading between rows of graves. She arrives at two identical headstones side by side. They’re both about a metre high, made from smoothly rounded black marble with inlaid gold lettering, gleaming in the sun. They look expensive but also classic, old-fashioned.
Janine kneels on the ground between them, glad that she remembered to wear jeans as well as boots. She turns to the headstone on her left and lays the flowers in front of it.
She says “Hi Mum.”


Janine places the flowers up against the base of the headstone. She reaches over to rearrange the large pink flowerheads that dominate the bouquet.
“I got you your peonies,” she says. “They didn’t have any pink roses though, so I got alstroemeria instead.”
She doesn’t mention the lavender and eucalyptus which also make up the bouquet – goes without saying. Her Mum must have filled a new vase every day, always with lavender and eucalyptus as part of the arrangement. The twin scents trigger detailed memories of their old house: the colour of the wallpaper, the trinkets on the mantelpiece. Funny how odours can instantly bring back things you’d forgotten.
She fusses with the flowers some more. “There you go. Yes, they do,” she murmurs, finding it all too easy to imagine Mum cooing over how lovely they look. There’s an urge to say ‘you’re welcome’, as if she had just thanked her.
Silences are easily plugged by memories. Sometimes it’s almost as if Janine can really hear her.
She takes a moment to let her fingertips run across the name engraved on the marble
Janine takes a deep breath, tasting her childhood. Lets it out slowly. She turns to the headstone on her right.
She says “Hi Dad.”


“Hello, sweetheart!” says the headstone. “Thanks for coming, I know how busy you are.”
A screen embedded in the black marble, which was displaying a black marble screensaver, flickers. A crystal clear image of her Dad’s face appears: crinkled, smiling, eyes bright blue.
“Frank not with you?”
“I wish you’d stop asking that every time,” Janine replies, irritated. “You know he’s never coming here, just drop it, okay?”
“All right, sweetheart,” the voice agrees cheerfully. The voice says everything cheerfully. It is, after all, Oscar Kinglake’s voice.
Janine sits down on the cool earth and thinks back to when they buried Mum, over ten years ago. The funeral organiser suggested having a QR code engraved onto the headstone (although she can barely recall what a QR code looked like now, were they the square blocky ones?). That way, anyone wondering whose grave they were looking at could scan it with their smartphone, and be taken straight to her mother’s website or Facebook profile (God, remember those?). A tasteful blend of traditional values with modern technology, the organiser had insisted.
Young and distraught, Janine had lost her temper with the patronising bitch. “Don’t be so stupid, my Mum’s 74, she isn’t on bloody Facebook!” Dad had calmed her down, saying of course this isn’t for your Mum, but it is a nice idea, you have to move with the times, sweetheart.
So naturally, after Dad had a stroke in his sleep and passed away two years ago, Janine kept her mouth shut and approved the lot. It’s a Macroverse Smartstone™, customised to look identical to Mum’s but with everything on the menu: RF chips, interactive smartscreens, inbuilt sound system, and a permanent 5G connection. “Does everything but glow in the sodding dark!” she’d remarked sourly to Frank at the time. Then spotted the ‘luminescent coating’ option. Sighed. Ticked.
“How are you, Jan?” the headstone asks.
“Yeah, I’m fine.” She manages to hold back from asking how he is.
“How’s the job? Same as ever?”
Janine shrugs, knowing it will be seen and interpreted accurately.
“Oh well, never mind. Are you going on holiday with your friends in July? I’ve been following the discussion and I’ve seen all the images of Marbella. It looks great!”
“I don’t think so, Dad. I’m a bit old for a girls’ week away.”
“Nonsense!” And then the headstone says something her Dad came out with all the time: “You’re only as old as the things you do.”
She gets a weird pang hearing that, a tightness of the throat. Unusual. She doesn’t usually miss her Dad that much.
That sounds so cruel, she knows. Janine misses her Mum every day. There’s a gigantic hole in her life and always will be. But she hasn’t had the chance to miss her Dad, because he’s still there online. Clicking Like or Dislike on her status updates. Commenting on her pictures and posts. Recommending things she might enjoy. Chatting to some of her friends. Not to mention all the veets from Dad linking to amusing videos he’s discovered, and his contributions to the latest comedy hashtags, like #replacewordwithPants or #youknowyouaredrunkwhen. That sort of thing always tickled him.
Oscar Kinglake may have died two years ago, but his auto has been running happily ever since.

David Wailing was born in Nineteen Davidey-Dave (all the best people were born that year) and live in London. He writes modern fiction, a blend of mystery, thriller and humour.

He has three novels available as Kindle ebooks: Fake Kate, Bang: Memoirs of a Relationship Assassin and Auto.

He is currently writing new stories for the Auto Series and serving as editor for the Off the KUF anthologies of short fiction.

Books by David Wailing on Amazon:

Posted by Michael Brookes at 13:20