In today's guest author interview we meet Bethany Turner, author of the Abigail Phelps series, you can find out more about her and her writing below: 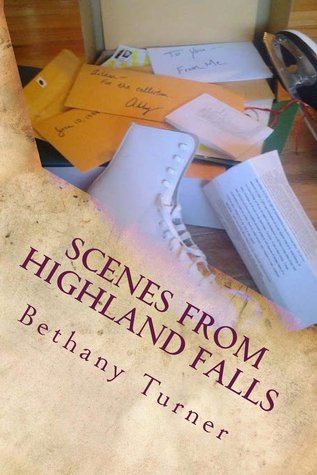 Please introduce yourself, who are you and what do you do?
My name is Bethany Turner, and I am a wife, mom, commercial banking vice president, and self-published author of RIDICULOUS reality-bending fiction known as The Abigail Phelps Series (Abigail Phelps, Scenes From Highland Falls, and Two Thousand Years).

What first inspired you to start writing?
I've written all my life, but I'd never previously finished anything because I always got bored. A lot of authors say the most difficult part of writing a book is getting started, but I never found that to be true. I've started countless books, but I never cared enough to finish one. Then I had an idea for a story which never got boring in my mind.

Your released books so far have formed a series, why did you choose to create a series?
There are a couple of different answers for that. One, as the story developed I realized that I couldn't do justice to Abigail's story in just one book. I'd created multiple layers of reality, and in one book I could adequately explain one layer, maybe two. But it's layers three and four which are the most fascinating and the most fun! But the second answer, if I'm being truthful, is that I just didn't want to say goodbye to these characters - especially Abigail herself. She fascinates me, and there is always more to tell.

What is it about your stories that makes them stand out?
This book began with the simple, fun idea, "What if I write a book about a fictional character, but all of her supporting characters are real people? Celebrities, and athletes, and politicians." And that alone makes them stand out somewhat, I suppose. But what really makes them stand out is that idea being taken a step further. Not just the idea, for instance, that Abigail was somehow involved with JFK Jr. and ice dancer Christopher Dean, but that actual events in JFK Jr.'s real life - his speech at the 1988 Democratic National Convention, his marriage to Carolyn Bessette, his fatal plane crash - may have come about due in part to the role of Abigail Phelps in his life. Christopher Dean didn't just meet Abigail Phelps. She was actually his partner all along. Jayne Torvill never existed. And yet, she did, of course. You know this, and yet after reading the books, you will never watch Bolero the same way again. After reading the books, you will never again be able to watch a clip of JFK Jr.'s DNC speech without picturing Abby's heartbreak as she watched on the television in her apartment, certain that the words he spoke that night represented the end of the life she thought she had. After reading the books, you'll never again see George Clooney smile that smug smile that he seems to smile before he kisses a woman in a movie or on TV without thinking about how it all came about because he and Abby couldn't get through a kissing scene without laughing at each other. And if you haven't read the books, everything I just said makes no sense. But somehow - and I can't explain it - after reading the books, you'll know exactly what I mean. Reality is in the eye of the beholder.

What was the last book you read?
I recently read Jane Austen's "Persuasion" again - I've probably read it 10 times.

What is your favourite song lyric?
Well, in the dedication of Abigail Phelps, I thank Billy Joel for being my muse, and his music and lyrics are basically supporting characters in the book. So I think I will have to go with the lyrics to the song which is most at the heart of who the character of Abigail Phelps is, and which really guided so many of my choices - the following lyric from Billy Joel's "Summer Highland Falls":

"Now we are forced to recognize our inhumanity,
Our reason co-exists with our insanity.
And though we choose between reality and madness,
It's either sadness or euphoria."

Which author do you most admire and why?
I have to say Jane Austen, and there are many reasons, but the primary reason is that she had a gift for getting right to the heart of what her reader wanted. Her readers may not have even realized that it was what they wanted, but it was. Deep down. And it's not difficult to guess how a Jane Austen novel is going to end, but somehow she still found a way to get you to hold your breath, just in case you were wrong.

What are you working on at the moment?
I have a couple projects in the works. My best friend (who happens to be my favorite author, along with Ms. Austen!) and I are collaborating on a very comedic murder mystery, and I am also working independently on another book in the Abigail Phelps Series, but with a very different spin...

Tell us about your latest work and how we can find out more.
Abigail Phelps, Scenes From Highland Falls, and Two Thousand Years are available for Kindle and in paperback, and you can find out more on my website, http://www.abbyphelps.com. There are lots of fun ways to interact through the website, as well as on Facebook and Twitter. On the website, you don't only interact with me, you also interact with Abigail herself. After all, reality is in the eye of the beholder!