My current crop of Hellraiser sequels comes to an end (I think there's one I haven't seen yet, I didn't know there were so many of them!), while for the most part they haven't been very good films they have provided some entertainment and had some interesting ideas. This seventh sequel turned out to be more of the same.

The story concerns a young reporter who is presented with a story about a suicidal cult that seemingly has the power to bring their members back to life. She follows up on the story and digs herself deeper into a world of pleasure and pain and more than a little madness mixed in.

When watching these I've adopted a two tiered approach, is this a good Hellraiser film? If that fails then is this at least a decent horror film? It manages to be ok on  both counts, on the Hellraiser angle it does mix the cenobite mythos well into the story, although I would have liked to have seen more about them, although in fairness that might have spoiled the reveal.

As a horror film it also ranks as ok, the horror is a blend of the usual gore, but with some nice psychological twists. There's an interesting blend of characters, but apart from the reporter you don't really get to the know them and for me that's the film's biggest weakness. It all feels a bit superficial, there's plenty of opportunity here, but it rushes it's way through. For example the hell train was a fun idea that's only really used in passing. 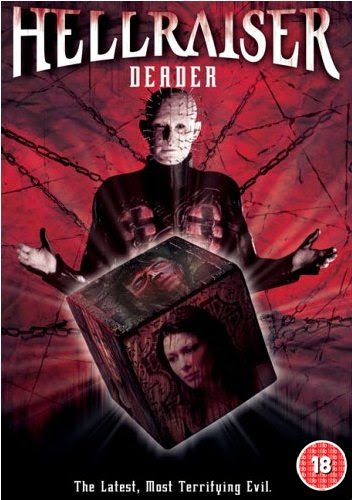 A journalist faces a battle against the forces of evil in this, the seventh outing in the 'Hellraiser' franchise. After uncovering a shadowy group that can bring the dead back to life, investigative reporter Amy Klein (Kari Wuhrer) soon finds herself enmeshed in the group's demonic activities whilst battling to keep control of her sanity.

Hellraiser: Deader is available from Amazon (and is an ok watch)

Posted by Michael Brookes at 17:23