The first film is a hard act to follow and while the sequel doesn't quite hit the same mark, it is a decent sequel. This time the action moves the LA in the midst of a heat wave and all out gang war. Instead of Arnie and his crack team of soldiers we have Danny Glover as an over the top cop and his elite squad.

The first problem for me is that in the first film while it ended up with Arnie on his own, for the most part he was part of a team that all carried their wait. The interaction between them was also more interesting than it is in the sequel. Rather than leading and being part of a team it feels like Danny Glover is a lone maverick that just so happens to have a few people tagging along.

The other issue is the location, while it could have been an excellent setting for tangling with a Predator, it's not really utilised to it's full advantage, mostly because it doesn't build the same tension as the first film.

So far I've only compared it negatively to the original, but in fairness it does have a few things going for it. Danny Glover does do the cop on the edge thing very well and it does work in the context. You do get the feeling that he's managing to keep going by sheer balls. It also has Gary Busey, who is always a fun addition to any film. For the majority of his role he actually manages to be fairly reasonable, but his true colours are revealed by the end :-)

The other aspect I enjoyed was the small glimpses of the Predator's culture, the skulls on his trophy board were pretty cool and he has some new toys to play with. All in all it's a decent action film that provides an entertaining watch. 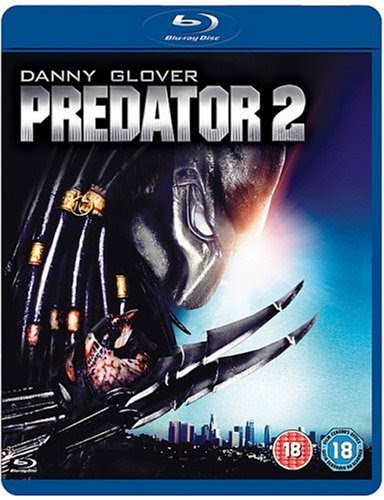 In this follow-up to 'Predator', crime-riddled futuristic Los Angeles becomes the target of an alien predator, killing drug lords and police alike. A maverick cop (Danny Glover) and a federal agent (Gary Busey) set out to capture the creature.

Predator 2 is available from Amazon (and is a decent sequel)

Posted by Michael Brookes at 15:26