Balance is the first novel in the trilogy by M R Forbes, it tells the story of Landon who is killed while protecting a chalice as a museum guard. He then finds himself drawn into the eternal conflict between Heaven and Hell, but not on either side, he's tasked with helping to mainain the balance (although rather conveniently the balance is currently tipped towards evil). He is a rare creature, that of being a perfect balance between human, angel and demon.

He's new to the business and the first lesson is to discover what he capable of while at the same time trying to restore the balance. The book draws a good balance between the discovery of this new world (or perspective on an old one if you prefer) and action. I preferred the discovery parts of the story, mainly because I usually enjoy peoples' different takes on theology and metaphysics and this story has some interesting ideas that are well presented.

The action works well and keeps the story going to a decent conclusion while leaving the way open for the rest of the trilogy. There's a good blend of characters, although they do stray a little into being  caricatures for the different sides of the war, although not by too much.

I do have one issue with the book though and that was that it needed another edit pass, removal of all the unneeded 'coulds' was the main offender. It wasn't enough to really hamper my enjoyment, but it was noticeable. Overall though, this was a fun read and worth checking out if you like your classic good vs evil stories, albeit with a new vibe in this case. 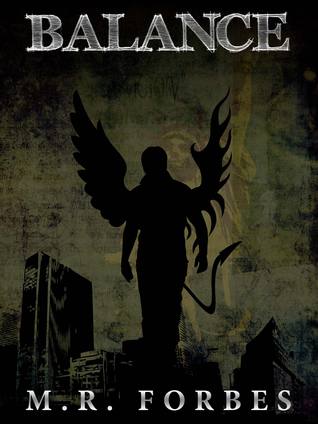 My name is Landon Hamilton. Once upon a time I was a twenty-three year old security guard, trying to regain my life after spending a year in prison for stealing people's credit card numbers.

Okay, I was supposed to be dead. I got killed after all; but a funny thing happened after I had turned the mortal coil...

I met Dante Alighieri - yeah, that Dante. He told me I was special, a diuscrucis. That's what they call a perfect balance of human, demon, and angel. Apparently, I'm the only one of my kind.

I also learned that there was a war raging on Earth between Heaven and Hell, and that I was the only one who could save the human race from annihilation. Dante asked me to help, and I was naive enough to agree.

Sounds crazy, I know, but he wished me luck and sent me back to the mortal world. Oh yeah, he also gave me instructions on how to use my Divine 'magic' to bend the universe to my will. The problem is, a sexy vampire crushed them while I was crushing on her.

Now I have to somehow find my own way to stay alive in a world of angels, vampires, werewolves, demons and humans that all want to kill me before I can mess up their plans for humanity's future. If that isn't enough, I also have to find the queen of all demons and recover the Holy Grail.

It's not like it's the end of the world if I fail.

Balance is available from Amazon (and is a fun read)