In today's guest author interview I welcome Harrison Davies, author of The Aduramis Chronicles, find out more about him and his writing below:
﻿ 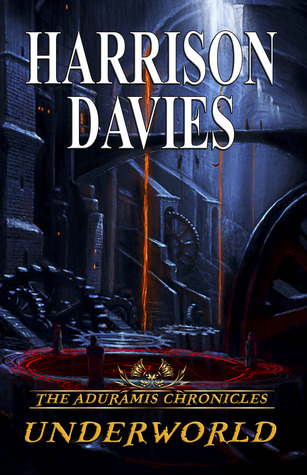 Please introduce yourself, who are you and what do you do?
My name is Harrison Davies and I hail from Hartlepool, North East England. I live in Newcastle upon Tyne with my partner of ten years, an African Grey Parrot called Oliver and a ginger Staffordshire Bull Terrier called Patch, whom we rescued. I work full time in a customer care environment, so my writing is limited to breaks, a few hours on a night and weekends. I also enjoy filmmaking and photography.

What first inspired you to start writing?
I needed a way to release an emotional turmoil. A friend said that writing was the best way to do this and introduced me to a book by David Eddings entitled The Redemption of Althalus. I instantly knew then that fantasy was my genre. I had written before, but nothing to the extent I do now.

If you could spend a day with anyone from history, who would it be and why?
I think that would have to be Winston Churchill. He never had a bad word for anyone, always put a brave face on and treated people as individuals, no matter their sexuality, colour or creed. I'd like to ask him what coping mechanisms he used to manage as he did during the war.

Your books form an extensive series, why did you decide to create a series?
Almost immediately. I knew that the story I had in mind would stretch to at least four books. This changed over time to three books with two prequels and further stories planned around some of the main characters. I know exactly what each book will contain and how I will progress to their end points. It is a very exciting time for me. I am writing the last book of the original trilogy, where all my secrets I've held in for four years will be revealed.

What is it about your books that makes them stand out against the competition?
A most difficult question to answer. But one were I'll let my readers do the talking. They tell me that:

* My characters grow. They don't remain static and they have the most important of all qualities, a background story that guides their emotions and actions.

* There's considerably less walking in my books. I will use other devices to get the job of travel done much quicker where I can.

* I am told that there are very few book s that have two brothers as protagonists. I'm not sure on that, but it seems my readers love the different personalities of each as they play off each other as any siblings would.

* I take time to explore each character and their life where possible, whether it be via flashbacks, dreams or memories. That way each characters becomes important to you, not just the main protagonists. Readers have said that they loved a certain character so much, that they want a series built around them. I guess I'll be writing till I'm 100 years old.

What was the last book you read?
Ooh, what a lovely pair: Our story - Ant & Dec's biography. (For those who don't know, a couple of geordie TV personalities in the UK)

Are you a planner? Or do you prefer to dive straight into writing?
I have a series of lists for each book with basic happenings and waypoints I wish to meet. From there I create mind maps and add to these frequently as ideas crop up. From this basic list I write and write and write and if that writing takes me off course, so be it. My instinct must be telling me I'm heading in the right direction, so I go with it and adapt whatever needs adapting. As long as I hit the end point, it's fine.

Incidentally, I wrote the last chapter to the final book four years ago, and that is set in stone. There are dozens of clues in Destiny of the Wulf & Underworld as to the final outcome, you just have to know where to look.

What are you working on at the moment?
I'm working on two things right now. During the day, I'm writing The New World, the final book in this particular storyline, and during the night I'm second drafting book two, Underworld, to send to the editor.

Tell us about your latest work and how we can find out more.
Underworld is my latest work and will be released in January 2014. That piece continues on from Destiny of the Wulf and takes places several months later. If I say to much I'll spoil this book for the reader, so I'll focus on book one.

The Aduramis Chronicles: Destiny of the Wulf.

"Written with exquisite attention to detail and a gritty realism by an immensely self-assured and talented new writer. This is a landmark fantasy debut that shines through as a refreshing read."

DESTINY HAS CHOSEN THEM, DEATH WILL MAKE THEM PAY.

Death desires to rule as king of the gods, and is poised to ignite a war in the heavens that would consume all life on the distant world of Er'ath.

Brothers Coinin and Marrok are thrust into a world of magic and summoned to a secret temple, where an ancient mage brotherhood tells of a great destiny that has surrounded them since before they were born.

Now the fate of this world hangs in the balance, and it is left to Coinin and Marrok to seek the Swords of Cerathil and save their home from destruction.

Treachery and deceit haunt them, and their very relationship is put to the test, as the ultimate battle for survival begins.

Thanks for stopping by.

Books by Harrison Davies on Amazon: