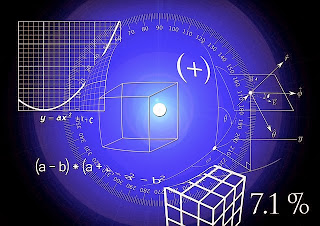 Writing stories is an organic process for me, I'll get an idea, a situation or even just a title and from that the story emerges. Sometimes the process isn't that smooth, for example I've had an idea rattling around my head for a while now, so I thought it would be fun to share some of that thinking.

Anyone who has read my books will be aware that I enjoy exploring the nature of reality from a variety of perspectives, whether they be metaphysical, philosophical or scientific, or generally a blend of all three. This idea is a variation on that theme, but let's see where it takes me.

In this case I have an idea and I know it will become a story, I just haven't identified what that story is, so here is the train of thought that I've had. In fairness it's not in particularly coherent presentation, but I hope you find the thinking interesting and please feel free to comment with your own thoughts.

So, it all started with a title: 'The God Equation'.

That will be my first assumption, that maths is the language of the universe, not merely a way to describe it, so where does that take us?

The first place is the physical nature of the universe, we know that there are three spatial dimensions that tell where something is and at least one dimension of time, which says when something is (although that when can be different depending on local conditions). There are a theories of more dimensions, but for the sake of this we can assume those to be tiny, almost dimensions within themselves and thus a means for packing information into smaller spaces.

This gives me another leap, what is the purpose of mathematics, a simplistic answer would be that it is a means for defining something, or more usefully for my purpose it is a process for gaining an answer. But an answer to what? In fairness we're in Douglas Adams territory here, but it does seem reasonable that if the universe is an expression of mathematics, then it does so in pursuit of an answer.

Ok, so we have a universe that exists to solve a question, why is the form of the universe different to the mathematics it represents? It probably doesn't, but that's because we are used to looking at it the other way round. That doesn't matter, but it gives me a few clues as to where is could go.

Let's take another step back. The universe exists to answer a question and the means to finding the solution has been encoded in the universe from the moment of its birth. I'm assuming here that the universe is self contained (that isn't the same as saying that it is all that there is!) and that there has been no external intervention in the unfolding of its process. That means that the moment of the big bang (I'll go with the generally accepted theory of the universe's creation) everything that would be needed is encoded in that singularity.

Physics tells us that everything started with that big bang, time, matter, energy - everything. Now let's take another leap, chaos theory states that from simple rules complex interactions can emerge. And that is what we see around us, the interactions of sub atomic particles form atoms, atoms interact through chemistry to build greater complexity, including our brain, which is apparently one of the most complex structures in the known universe.

Dialling back again, I'm saying that the universe is an equation, but not a static one. I posed the question earlier about why the universe has a physical form, I propose that the reason for that is because that is actually the most efficient manner in which to represent the data and evolution of the equation.

The evolution is a key point here, this is no linear  equation except at the highest possible scale. No, what we have here is a multitude of equations, all being processed in parallel, all evolving. Some of these equations form groups, organised groups like a star, a planet or even a person. The evolution of those objects feed into the higher equations until at some stage the universe reaches its solution.

What is that solution you may ask and I guess that maybe what the story will be about :-)