In today's guest author interview we meet T.S. O'Neil (author of Tampa Star), find out more about him and his writing below: 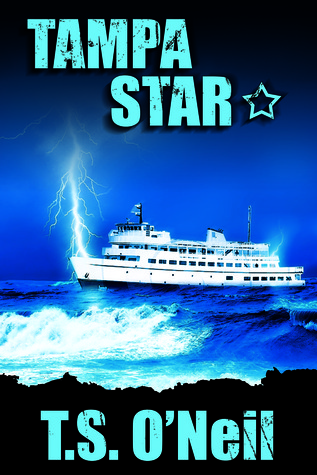 Please introduce yourself, who are you and what do you do?
I am 54 years young and originally from Newington, CT. I went to undergraduate school at Northeastern University in Boston and have an MBA from the University of Phoenix in Technology Management. I spent a good amount of time in the military; first as an enlisted Marine in the Marine Reserve, then about ten years on active duty as an officer in the Military Police Corps of the U.S. Army and I finished out my career in the Army Reserve.


During that time, I traveled a lot of the world, picked up Spanish, as the Army sent me to language school and managed to have a lot of fun while managing to avoid combat. While most sane people look at the being shot at as merely a life threatening situation, those in the military look at it as an opportunity for career advancement.

As a careerist, I was an abject failure as I was always in the wrong place at the wrong time. Meaning wherever I happened to be, peace was breaking out like mad.

I was supposed to jump into Omar Torrejo Airport with the Rangers during Operation Just Cause, but instead I went on to the MP Officer Advance Course. The invasion took place in December of 89, as I drove home to Connecticut for Christmas break members of my former unit parachuted into glory. Later, as I sat in Panama enjoying the new era of peace and prosperity, Operation Desert Storm took place. My luck finally caught up with me and I spent part of a tour in Iraq. Other than a couple of nights of rocket fire, the period in Iraq was relatively peaceful.

I got out of the military and eventually gravitated to the IT Field. I am currently an IT Architect for a healthcare company. I live in Seminole Florida with the love of my life, Suzanne and we got married on Oct 4th of this year.

What first inspired you to start writing?
I have a very active imagination and was always getting into trouble in grade school for day-dreaming. I think being a fiction writer is a great endeavor in that you get to invent your own reality and create a different world.

When not writing how do you spend your time?
I work a regular job for forty or so hours a week and spend time golfing, biking and taking my wife out to keep her happy. I used to do a lot of scuba diving with trips to the Great Barrier Reef, the Caribbean, Thailand and the Philippines, but I think those days are behind me and I’ll just make do with snorkeling.

What attracted you to writing thrillers?
Thrillers are fun. I’m not a romantic guy, so that genre is not for me. I think it’s interesting to impart thrills and suspense into the plot and ensnare the reader in the action. My military background allows me to place believable technical and operational characteristics into the story-line and I believe this lends a certain level of credibility to the characters and story.

I've rubbed shoulders with lots of Special Ops types and actually served in a unit within that command for a while, although I've never claimed to be a true “snake eater.” During my time in the Marines and in Special Operations, I learned enough about how certain special ops units like the SEAL, Force Recon, Army Rangers and Special Forces operate and researched a lot more to write accurately and realistically about that particular subgroup.

What do you bring that's new to the genre?
After thirty or more years association with the military, I feel I bring a verisimilitude (sorry, but I've always wanted to use that word in a sentence) to the genre that a lot of authors may not be able to. When I write about firing a particular weapon, chances are I've actually fired it. That may not mean much if you’re talking about a nine millimeter pistol, but it might if you’re talking about firing the M2 Machine Gun.

I can detail how different units operate that might not be able to be accurately captured by writers without that experience. I have experienced first-hand experience ranging from being a Marine Corps Recruit up through being the Deputy Support Operations Officer for a Theater level command. I also received the military education to cover any potential holes in my military curriculum vitae.

In my opinion, some of the funniest guys in history are Service Members; a catch all phrase for Soldier, Sailors, Airmen and Marines. Another thing I try to impart is the humor with which these guys view life. I think it’s because they are often living in austere conditions and have lots of time on their hands. I believe that there are a lot of frustrated comedians in the service as they’re given a lot of material to work with―based mostly on the stupefying ridiculousness of the huge bureaucracy that is the U.S. Military. They are given lots of material to work with, but little freedom to do so; hence the frustration. I try and imagine what would accurately be said in humor to mask the occurrence of a bad event.

Someone once said that war is interminable boredom punctuated by moments of terror. An active imagination is what keeps you in good spirits and help you fill the void or salve your fear. I bet King Leonidas was an especially funny guy to be able to crack wise when confronted by hundreds of thousands of Persian Soldiers. “Come get them,” is, if not the first bad ass line in history, probably the best known.

What is your favorite song lyric?
There was a song lyric that I wanted to use for the first paragraph of my newest book, Starfish Prime. It’s from a song called Apathy. The opening lyrics to the song are very dark and it helps set the mood for the opening sequence of events in Starfish Prime.

Which author do you most admire and why?
Elmore Leonard, may he rest in peace, taught me to believe that you can and should try to write the way people speak. People are funny and they say lots of humorous things, even in tense situations. He famously said, “Try to write what people want to read and leave the rest out.”

Leonard labored in obscurity for most of his career and finally found some level of acclaim after Hollywood discovered him by basing movies on Get Short, 3:10 to Yuma and Jackie Brown.

Another great author I admire is Norman Mailer, but for different reasons. He managed to write a really twisted thriller called Tough Guys Don’t Dance and also wrote the script for the movie of the same name. The protagonist, played by Ryan O’Neal, is watching his world crumble all around him; his wife leaves him, he can’t stop drinking and oh yeah, there are two heads in a bag in the basement and he is left trying to figure out how they got there. I would always watch the movie when my life was at a low point and it would allow me to say: “Well, at least I don’t have it as bad as that guy.” I believe the movie bombed, but the script closely followed the book and I liked that.

What are you working on at the moment?
Starfish Prime is the sequel to Tampa Star. I am done with the manuscript and am now editing it. Michael Blackfox is pulled back into Marine Special Ops for one high risk assignment. Since he has been out, a new Special Operations unit has been formed and his skill set makes him uniquely qualified for a mission in the jungles of Venezuela. Michael is forced to participate in the operation or watch his father be sent to jail for the crimes he committed in Tampa Star.

Tell us about your latest work and how we can find out more.
I published Tampa Star late last year and it is my first book. It’s the story of a father and son that’s told in two parts. The first part of the book starts in the early seventies in the aftermath of the Viet Nam War.
The father, Char, is a Seminole Indian and former Green Beret who is wounded by a dead guerrilla in the aftermath of a firefight. He is subsequently evacuated and discharged with a bum leg. Char moves to the Florida Gulf Coast, gets a job, meets a girl and life seems to be going his way, until he falls in with the wrong crowd and things spiral out of control from there. The second part of the book picks up in two thousand and four when the son, a former Recon Marine Officer, is discharged and travels to Florida in search of his father. The story has a host of villains you will love to hate, including a corrupt cop, a Mafia Capo and a Russian ex-CIA interrogator. I think the story has a lot to offer as the characters are richly drawn and are believable. I takes place in and around Florida and is written in the “Florida Glare” style of authors like Elmore Leonard and Laurence Shames. It has the same style of witty, realistic and somewhat caustic dialog that they are known to employ.

Posted by Michael Brookes at 12:55