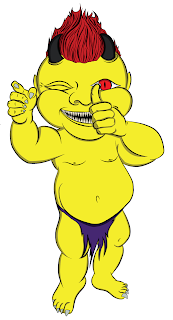 The Imp has had a busy week over on his new blog (although I don't really know what he's boasting about as I've posted more on my blog than he has on his, but he said that he'd widdle in my ear if I didn't and he means it!) and he's asked (told) me to tell all you wonderful people what he's been up to.

On Saturday he posted the latest horrorscopes. apparently I will be struck twice by lightening. It hasn't happened yet so I doubt his credibility. Anyway, they're still an amusing read:

Sunday saw the start of a new feature called Imp Rhymes, in this he basically corrupts innocent children's nursery rhymes, I'm not sure what his evil plan is with these but you can find out here:

His final post of the week was his weekly feature on the Imp's Internet Delights, this week he writes about Maddox's Greatest Page in the Universe which I agree is a very funny site:

So I beg you, pay his blog a visit so I don't smell of demon piss for the rest of the day!

Posted by Michael Brookes at 08:49