﻿
I first interviewed Jason Reeser back in January (you can read his original interview here), I recently caught up with him, you can see what he has been up to in the interview below:
﻿ 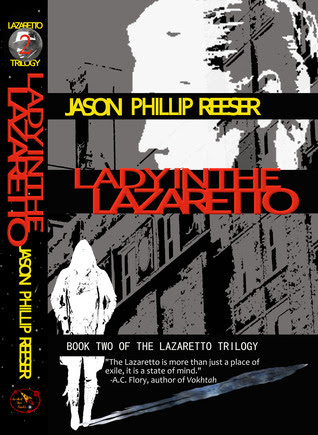 What has changed in your life since we last spoke?
When we last spoke I had just published my collection of Ghost Stories, Cities of the Dead. Since then, I was privileged enough to be asked to read from the book at Lamar University last spring, which was really fun to do. And this October I’ve been asked to participate in a panel on independent publishers during the Louisiana Book Festival in Baton Rouge. It is really enjoyable to be able to meet fellow authors and readers with a common interest. Writing can be a very lonely experience, and getting out where I can talk with people is greatly rewarding.

Have you leant any new wisdom?
I doubt very much that any wisdom I have learned is new. I always just feel like I’m catching up to so many who have come before me. As any author might, I used to worry how my writing would be received by readers. But as I hear feedback more and more, I am discovering that when readers have a question or a comment, it is usually never over one of the things I’ve worried about. Readers are so different. Readers of the same book have complained that I left too many loose ends and also I tied up everything too neatly. So if I’ve learned any wisdom it is that while I can listen to criticisms, to learn what readers don’t like, you can’t please everyone. And like I said, that isn’t very new wisdom.

Have you become a better writer? If so, how?
I’m not the first author to say this, but I can’t think off-hand who said it first: my editing is getting better, not the writing. However, the more I edit what I’ve written, the more I begin to edit in my head as I’m writing, so I guess you could say the writing is better. Just today I was told that one of my more recent stories was written in such a way that the reader did not once think about my writing skills –they just enjoyed the story. That was a great compliment.

What are you working on at the moment?
I’ve just finished the third book in my Lazaretto trilogy: Kiss of the Lazaretto is a book that was difficult for me to write. I had to work on its story for many months, discarding ideas, fleshing out story lines, developing themes, then tossing all of that out the window and starting over. It was tough, because I really felt that the first two books turned out so well, I wasn’t sure I could develop a third book that would match up to the others. And I didn’t want to write one just because I’d planned to write a trilogy. So I took some time away from it, wrote and published a travel book on Paris, and finally came back to the third book last spring. After a slow start, it finally came together and I outlined the last two-thirds of the book in one day. I never do that. But it just worked out that way. And once the outline was done, the writing went very fast. Now that it’s complete I’ll set it aside and let it simmer. The work this winter will be to rewrite and edit it so it will be ready this next spring. In the meantime I plan to write an action comedy for a little comedic relief in my life.

Tell us about your latest release and how we can find out more.
I just published Lady in the Lazaretto, the second book in the Lazaretto trilogy. This book follows an investigation in the Lazaretto of a body that was buried 30 years in the past. As in the first book, there are multiple story lines following several investigations that all weave together into a dark tale of broken trust, ambition, and sacrifice. To learn more about it you can go to rocketfirebooks.com. As with all of my books, they are available in both eBook and print editions.