Film Review - Queen of the Damned

Although it is the sequel to Interview with the Vampire this is a very different beast to the first film. Nobody from the original is in this and it has a much younger, more goth music video feel to it. In a sense that's not necessarily a bad thing as I quite enjoyed the music in the film.

The story centres around Lestat who has woken after a century of slumber and decides to go public with who he really is. This angers the other vampires and makes him a target, meanwhile the queen of vampires has arisen and seeks to make Lestat her king.

It's a fun watch even though it does stray into romanticising vampires, although they do remain monsters. The music video feel keeps the pace quick and punchy. Unlike the first film it lacks quality, the cast do a reasonable job, but no-one really stands out, except for Marius, for some reason I enjoyed his character more than the others.

Overall it's entertaining enough, far from great but a fun watch. 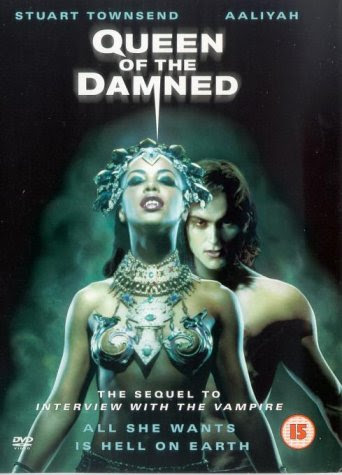 Legendary Vampire Lestat has risen from a decades-long slumber, determined to step out into the light. No longer content with being banished to the shadows, moving among mortals who never truly see him for what he is, Lestat has re-invented himself as the closest thing to a god on Earth: a rock star. The intoxicating lure of his music has snaked its way around the globe, ultimately finding the ear of the slumbering ancient Queen Akasha in her crypt beneath the Arctic ice. Mother of all Vampires, Akasha has been resting for centuries, waiting for the right time to rise again and seize dominion over the world. Lestat's music is the revelation she has been waiting for, and she desires that he rule beside her. But can Akasha be stopped? Her malevolent power may be too great for even the most ancient of the immortal Vampires to combat--she created them, and their survival depends on her own. After all, Akasha is used to getting everything she wants... and all she wants is Hell on Earth.

Queen of the Damned is available from Amazon

Posted by Michael Brookes at 17:19