Continuing on from yesterday's guest author interview with Robert Holt (you can read it here) we meet another author from the 'All Hallows Evil' anthology - Jason Purdy. Jason was also one of the winning story writers from July's short fiction contest, you can read his and the other winning stories here.﻿ 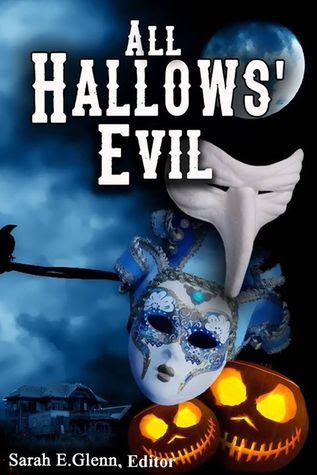 Please introduce yourself, who are you and what do you do?
I’m Jason Purdy, I’m 22 years old from Northern Ireland and I’m a writer, a student, and I’m pretty handy with a camera and an editing suite too. I’ve been writing most of my life, since I was old enough to hold a pencil (the wrong way, apparently) and in the last few years I’ve really made a big push to sit down for a few hours every day and bash a keyboard. It’s worked well for me, I’ve got one published novel, several short stories on the cusp of being published and five full manuscripts that need to be brutally culled and redrafted before they can see the light of the day.

Other than writing, I love reading, playing video games, listening to music, and watching television and films. My favourite TV show at the moment is Breaking Bad (isn’t it everyone’s?) and as well as writing, I enjoy camera work, editing, film making and a little bit of acting. I do bits and bobs of paid freelance work when it comes up. I’m doing Media Studies and Production at university and I am in my final year and I never want to graduate.
What first inspired you to start writing?

I’ve always loved reading. My Dad used to read me Roald Dahl when I was a wee kid and from there I fell in love with books. I got taken to the library every weekend and I’d get three books each time and have them done well before the next weekend. I eventually ploughed just about all the kids’ books and had to get my Dad to start sneaking grown up books for me. He grabbed me some Stephen King. I nearly shit myself, it was great.

Alongside this, I’d always been writing random little stories and comics for fun and to pass the time at School rather than actually paying attention. Reading so many great stories made me want to write a few of my own. I always loved when a creative writing competition came up in School and I always got a lot of praise for my stuff. From there, I thought, why not? I’ll write. Sure, it’s handy enough, right? Once I published Cigarette, I started considering myself a writer in my own head and it’s how I identify myself now. It gets you funny looks sometimes but it’s worth it.

You write horror and crime, do the two go together or do you like keeping them separate?
I like to keep them separate at times, and mesh them together too. My first novel, Cigarette, is predominantly a crime novel, as are its two sequels. Most of my short stories seem to focus more on a horror style bent because I find it easier to sustain horror over a few thousand words rather than over a whole novel. Mostly I’d say that I write humour, with elements of horror and crime meshed in. All of my writing might not be horror or crime, but it’s always funny to some degree. Usually darkly funny, satirical, I suppose. That’s how I like to write. I find it impossible to take anything serious. If I try to write a po-faced story it’ll end up getting silly so I just start funny. In my opinion, all the best horror films make you laugh right before they scare the pants off you. My last two manuscripts (and most of my scripts) have been primarily humour based, but that’s more of an effort not to let myself fall into a certain crime or horror rut.

To get back to the point of the question, I think horror and crime work great together and great separately. Not all horror is crime but most crime is horrible. There’s an element of connection between the two whether you write it or not. It’s fun to try and make the two of them funny, though.

Do you read in the same genre that you write?
I read in all genres (except for erotica, no no no no no no) and I try to cover as many of them as I can in my writing. I’m throwing around a few sci-fi and fantasy ideas for my next project, and right now I’m working on a sort of comedy/romance sort of story. It makes me feel ill to write the word romance and admit to writing it, but there’s an element of it in every genre, whether it’s crime or horror or anything else.

Someone keeps telling me to write an erotica story (you know who you are) but it’d be hard not to write it as a piss take, and if I happened to write the next 50 Shades I think I’d have to take myself out back and shoot myself in the face. Sure the money would be nice,

Which author do you most admire and why?
Has to be Stephen King. He’s just been around for so long and he’s never written anything that I didn’t like. I’ve practically read everything he’s ever done and enjoyed it to some extent. Sure, he’s had some near misses, but a lot of his misses are still better than other people’s hits. My writing style is heavily inspired by his. He has a sort of wonderful every man way of talking to his reader that you feel like you’ve just sat down in the pub with him, and he’s slowly working his way through several pints while he tells you about this really scary story he heard the other day. I love that, I think it’s counterproductive when an author gets too flowery with your language. It doesn’t matter how good your story is if the average person can’t make head or tails of it. A thesaurus does not make you a good writer. I will argue that until I’m blue in the face.

Plus, King’s On Writing memoir is filled with fantastic advice and great anecdotes and it’s pretty much what got me writing all day every day the way I do now. King was my gateway drug and now I’m absolutely hooked on all of it. The withdrawal is fierce but the highs are bloody brilliant.

Where is your happy place?
Has to be at the desk in my bedroom at my flat. With a cup of coffee beside me, some good music pumping through my earphones, and my girlfriend snoring in bed behind me. That moment where you forget where you are when you’re writing and just get totally carried away with it all is beautiful and I’ve come to crave it every day now. It doesn’t feel like work and if I can make a living off this, I’ll be over the moon.

Failing that, a rooftop Jacuzzi with an ice cold bottle of Blue Moon, a burger, music blaring, and the sun beating down on me – but I’d imagine that sounds like a pretty happy place to just about everybody.

What is the best piece of writing advice you have received?
“How do you do it? You do it. You write. You finish what you write.” – Neil Gaiman.

“Amateurs sit and wait for inspiration, the rest of us just get up and go to work.” – Stephen King.

The best advice I’d give to anyone is to set aside an hour a day, and sit down, and just start writing. Right anything, write a shopping list, right what you should have said to that prick bus driver yesterday, what you should have said to that girl or that guy that was flirting with you (outrageously so, everyone agrees) but you just couldn’t find the words to say back to her. You’re a writer, you’ve got nothing but words. Go make them!

What are you working on at the moment?
At the moment, I’m working on a strange sort of comedy/existential horror novel which currently has no title. Titles usually come to me when I finish so I’ll wait for that. After that, I’ll be redrafting the sequel to my debut novel, Cigarette. After that, as I’ve said before, I’ll be going the horror or sci-fi route, either with another script or another book. I’ll continue to write short stories because they’re quick and dirty and beautiful. Beyond that, there’s a thousand ideas knocking about and luckily Microsoft Word can’t run out of ink because otherwise I wouldn’t be able to afford this nonsense.

Tell us about your latest work and how we can find out more.
My debut novel Cigarette has just undergone a lovely redraft and is better than ever, with up to 30% more swearing, according to a YouGov poll* and it’s got some nice reviews on Amazon and Goodreads already, so it’s worth checking out purely because other people like it so you should too. Here’s the link on Goodreads:

Cigarette follows the misadventures of self-appointed ‘ex- gangster’ Dave Benson as he unsuccessfully attempts to see off his previous shady life in style. When his childhood friend, Jimmy, comes knocking on his door with one last job, Dave finds himself unable to refuse the offer.

In Dave Benson, Jason Purdy has created an unlikely hero; an alcoholic unhinged character with a missing finger and an irrational fear of smoking, working a 9-5 desk job he doesn’t understand, Dave is also a man stuck in limbo. His struggle to leave the past behind leads to a bizarre series of dealings with a gangster called Drum, and his three psychotic partners.

With both chilling moments and fantastic streaks of dry humour, Cigarette is a darkly funny novel that gently pastiches the familiar clichés of gangster fiction. Jason Purdy has developed fascinating and identifiable characters that could easily live beyond the pages of his first novel.

I’ve also recently contributed a short story to Mystery and Horror LLC’s collection, All Hallow’s Evil, which is shaping up to be a great collection, and I’m not just saying that because I’m in it. My story is Bill’s Chair which is a dark horror/mystery about a lone fixer travelling America who comes across a job that’s not quite what he’s used to.

Here’s the link on Goodreads:

*Poll results may be fabricated.

Book by Jason Purdy on Amazon: