In today's guest author interview we welcome Richard B Knight, find out what he has to say below:
﻿ 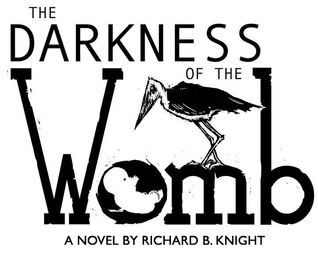 Please introduce yourself, who are you and what do you do?
My name is Richard B Knight and I like to write. (I know it's corny to introduce yourself with a rhyme, but I don't care). I teach English to seventh graders as a day job, and write for fun. I also sometimes get paid for writing, like when I write articles for Complex Magazine's online edition: http://www.complex.com/author/rich-knight. The Darkness of the Womb is my first book, though, and you can find it at amazon, Barnes and Nobles, or anywhere else eBooks are sold. Just search for it. :)

What first inspired you to start writing?
Nothing really inspired me. It's just something I've always done. But I have an interesting story. Back when I was in fourth grade, my teacher asked all of us what we wanted to be when we grew up. Well, wanting to be funny, I wrote "Drag Queen Garbage Man". But when all of my peers started reading off things like "Doctor" and "Lawyer", I figured I better change it. So I wrote "Author" instead. I've stuck with the title ever since.

And what attracted you to the darker side?
Everyone likes the dark side. It's why people go to NASCAR races hoping that a car flips over and somebody gets hurt (or killed). It's why people gravitate toward villains even though they themselves would never want to be in danger or get hurt. In short, the dark side is cool.

You also write comics (which is pretty cool), how does that differ from writing a novel?
First off, thanks, and secondly, it's not really that much different. You just have to think more of what action you want to show and how will it look best in the panel. Being succinct is key. You have to say a lot with a little.

Which author do you most admire and why?
I really admire Kurt Vonnegut. He wrote weird stuff and people actually read it! That inspired me to write whatever I had in my head and not worry if anybody thought it was strange. As long as it was good and had characters you could relate to and like, then people would read it. Mr. Vonnegut had a lot of guts to let his freak flag fly. Rest in peace, KV.

What is your favourite song lyric?
Wow...uh...I like a lot of music, just like everybody else, so that's a tough question. It'd probably have to be a line from The Lamb Lies Down on Broadway by Genesis. One of my favorite lyrics on that album is "It seems they cannot leave their dream. There's something moving in the sidewalk steam." I just love that line. It's really creepy and reminds me of that second where you wake up and you're still somewhat stuck in your dream. You'll believe anything in that split second. Anything.

Where is your happy place?
My happy place is in my wife's arms. Oh, and Pizza Hut.

What are you working on at the moment?
I'm writing a YA novel called A Boy and His Corpse. It's, uh, weird.

Tell us about your latest work and how we can find out more.
Well, A Boy and His Corpse won't be done for awhile, but you can find more of The Darkness of the Womb at my website here: http://thedarknessofthewomb.com/. As you mentioned, there are comics for it. And the secret of the lost hummus. It's hidden, though. Be a good dear and find it for me, won't you? :)

The Darkness of the Womb is available from Amazon
Posted by Michael Brookes at 13:23