I'd heard good things about this book before reading it and I'm pleased to report that I wasn't disapointed. The story is set in contemporary Britain and the country is fed up with the rising crimunal country and elect a stronger government, one that is able to push through capital punishment, along with the infamous 'Third Rule', instead of three strikes and you're automatically locked up it is now three strikes and you're executed.

Against this backdrop we follow a number of seemingly disconnected characters, the policeman recovering from his injuries who has turned to drink and then his son is killed in a hit and run. His drinking friend the reporter who starts poking in the wrong places. At first the connections are vague, but as the book progresses they coalese and build the pace.

The author writes confidently and provides some strong insights into the thinking of his characters. It's worth reading for that alone, but the interesting story raises this from good to an excellent read.

I do have one complaint about the book, the end is very sudden, it could have done with rounding off a little more. That however is a minor complaint as the next book is available and has been added to my TBR. An excellent read, well worth buying. 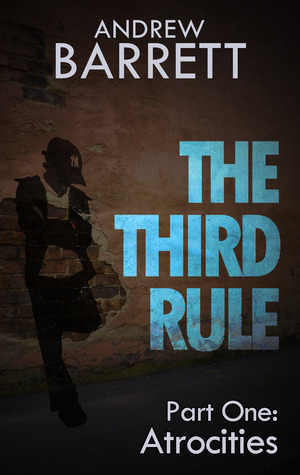 Part One of The Third Rule: Atrocities.

You’re still alive until you meet The Third Rule.

England. New System. New Rules. Old Corruption. In a world where truth and justice are executed as freely as the criminals, a Rule Three conviction earns you a trip to the slaughterhouse and a bullet in the head. And sometimes, you don’t even need to be guilty.

CSI Eddie Collins is dragged into a new turmoil after a hit-and-run driver leaves his son dead. He and reporter Mick Lyndon begin to uncover things that attract the wrong kind of attention from the wrong kind of people….

The Third Rule: Atrocities is available from Amazon (and is a 5 star read)

Posted by Michael Brookes at 10:12