Here's a shout out for Allen Stroud's 'The Sword of Wisimir', this is the first book in his epic fantasy series, so check it out. Look out for an exclusive interview with Allen tomorrow. 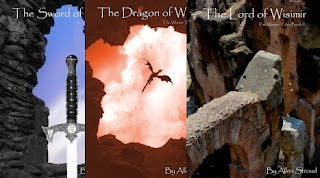 This Wednesday to Sunday, you can pick up a copy of "The Sword of Wisimir", the first book in the Wisimir Tales, for free on Amazon.

Opportunistic thief, Jack Von Drey thinks his luck is in when he steals the Governor's taxes from the back of a treasury wagon. But it turns out, this is a game with higher stakes than he bargained for.

City Minister, Urin Braymes makes one bad decision. Unfortunately for him, it opens him up to being blackmailed for the rest of his life.

Magister Leel's scheme to recapture his position of power seems to be right on track. But, when he makes a bargain, he finds he has unleashed magic that even a wizard cannot control.

And Jarno Herren? Well he just wants to find out the truth.

The Sword of Wisimir is a fantasy tale of crime, intrigue, life and death. Where ideals are cheap and, in the end, everyone finds out what they'd sacrifice to survive...

If you read and enjoy, you can find out more from this website, or by joining the Wisimir facebook group.
Posted by Michael Brookes at 13:05