Yesterday I posted a shout out for Allen Stroud's 'The Sword of Wisimir' which is currently available for free download from Amazon (see the book links at the end of the post). Today I interview Allen and he tells us about his latest release: 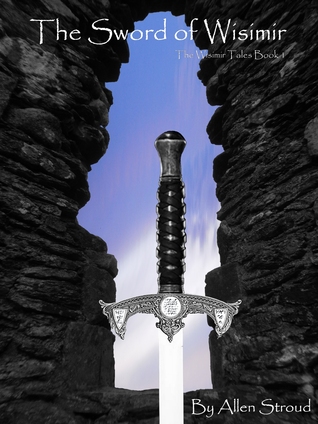 Please introduce yourself, who are you and what do you do?

I'm Allen Stroud I'm a University Lecturer in Film and TV Production at Buckinghamshire New University in High Wycombe, England. I've been teaching writing for nine years, specialising in Fantasy and Science Fiction. In that time I've taught some fantastic aspiring young writers and learned as much from them as they have from me.
What first inspired you to start writing?
The first story I wrote was aged six or seven about the pencils in my pencil case. I gave them all character names, "Sergeant Crimson" I still recall! At the time we had A4 work books which we were allowed to write in and my teacher encouraged me and another boy who sat next to me. My story had to be longer than his and it finished up at fourteen pages to eleven of his. Although, some of the pages only had five lines written on them! Scriptwriter even then...

And what attracted to writing fantasy stories?
Bit of a cliche here to say it was roleplaying games! Like many would be writers, I cut my teeth on trying to make an evening's D&D session with my friends sound as interesting and exciting as we thought it was at the time. Took me ages to write it in such a way in which it was exciting and accessible, but that's part of the learning process.

If you could spend a day with anyone from history, who would it be and why?
Good question! It would be a choice between two. Firstly Warinus De La Strode - the originator of my family name who fought at the Battle of Hastings. I'd want to be there on that day and with him. I've always been fascinated by the period and seeing what actually happened when he led a group of people in the battle (Crossbowmen we believe?). If I couldn't get Warinus, I'd plump for Richard Stroud the retired shepherd from Great Bedwyn, around 1840 to ask him about his life and his parents, because we're really stuck on the Family Tree research!
What is it about your books that make them stand out from the competition?
Depends what I'm writing, but I do try to bring a fresh perspective. The Wisimir Tales are pacy action adventure fantasy stories, The Durrington Stories are quirky urban fantasy and my science fiction work, like Elite: Lave Revolution will bring interstellar scheming, laser beams and space combat. In general, all of my work is about a strong story that takes you along for the ride.

Every author loves to receive a good review, what has been your best review so far?
I've had some lovely comments as I've developed my work. One of my friends, who wouldn't mind me sharing this, said the following:
"I must be honest I only downloaded The Sword of Wisimir to be polite but I found it so engaging that I couldn't put it down and had to get book 2. The way you write makes it so easy to image the look of the city and characters which for me is a major part of engaging with a book and wanting to continue."

I think that kind of summed up my thoughts on writing. I'm quite self criticial and despite the work I do, it's easy to second guess your instincts on whether you've written something good. When you produce books, your friends want to support you and want to encourage you, but when one of them has to write to you and confess as above and then spends most of the next year nagging you to finish the sequel, it spurs you on. When people get inspired by things I do, I get inspired too.
What is your favourite word?
Hmmmm... I do rather like putting A and E together in things. I have a term I use for soul in the Wisimir world, called Alarae. I like the welsh word Caer and the derivation Caern as well, which gave me Caraenath as a fantasy kingdom way back when I started writing fantasy. Fission holds a special place for me too, as Fission Works was a short story anthology I ran for a number of years.

What are you working on at the moment?
Currently writing the aforementioned Elite: Lave Revolution a tie in novel to the forthcoming computer game Elite: Dangerous, due out in March 2013. Just finishing the first draft on that, then I'll start on the next Wisimir and another Science Fiction piece. I'm also working towards my PhD, titled - “Investigation and Application of Writing Structures and World Development Techniques in Science Fiction and Fantasy.” Tell us about your latest work and how we can find out more.The Lord of Wisimir continues the story of Jack Von Drey, his friends and enemies as they try to rebuild the shattered city after the events of the second book. If you've not read any of the series, I won't spoil them for you, but the main themes are generally clued from the title.

I like writing the Wisimir Tales. I'll be doing one a year for the foreseeable future and every three months I make the first book: "The Sword of Wisimir" available for free for the maximum five day promotion Amazon allows. The next one starts on Wednesday the 2nd of October. I'll also be sorting out paperback availability through this site in the next few months if you'd like copies of the series on your bookshelf.
Books by Allen Stroud on Amazon: