In today's guest author interview we welcome fantasy and science fiction author Alex James, find out what he has to say below:
﻿ 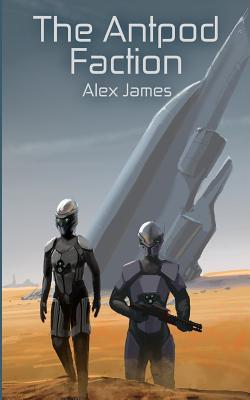 Please introduce yourself, who are you and what do you do?
My name is Alex James. I am a science-fiction and fantasy author. The sf/fantasy I write usually has the subgenres military/political/adventure/dark, which is in line with the fiction I read. I write stories mainly about the themes of alienation and empowerment in my stories. As somebody diagnosed with Asperger Syndrome, these themes make sense to me.

In my spare time I read fiction (mainly science-fiction) watch films, watch anime, and play games. Most of the time I am proofreading, formatting my stories, marketing or otherwise trying to figure out what to do next.

What first inspired you to start writing?
I had an idea in my head for a while. I wanted to get this idea on paper. The original idea was a story about people with Asperger syndrome or other learning disabilities living on a planet.

The nature of the story actually changed a bit once I started writing drafts. For one thing the characters ended up being organic androids called antpods. It’s probably not easy for others to see how humans with developmental conditions have anything to do with antpods…

Which author do you most admire and why?
This is a difficult question. I have a few favourite authors. I read Alastair Reynolds and Frank Herbert frequently. I also really liked R Scott Bakker’s Prince of Nothing Trilogy. I would say I admire authors who write worlds I am very engaged with, or which I can visualize easily and with enjoyment.

Are you a planner? Or do you prefer to dive straight into writing?
Sometimes I plan my stories. But sometimes I dive straight in. Diving straight in has been a more recent thing for me to do. If I have a lot of ideas that need to be fleshed out before I write then I will probably plan the world I am building or the characters I hope to put in my writing.

Where is your happy place?
My happy place is when I am writing a new world, constructing plots or am comfortably reading a book I am engrossed in. I have done a few events in the UK on a stall. It’s rewarding to meet people and talk about your book, or even books in general. I’m soon learning that forums are great that way too!

What is the best writing tip you have received?
The best writing tip I have received … I once went to a creative writing group and although there were no spoken tips I did pick up on the general acceptance and tolerant atmosphere there. It certainly reaffirmed the belief I had that every writer’s work is unique, and should be appreciated for the value it contains. Listening to other people’s writing and reading your own out is a process of sharing and understanding, at a level that is, in a way, deeper.

What are you working on at the moment?
At the moment I am working on a galactic space-opera. I want to construct a legendary superhero endowed with mystical powers. I want this story to have a host of unusual alien characters in. I’m hoping to put in a lot of action.

Tell us about your latest work and how we can find out more.
My latest (and first) published work is The Antpod Faction. It is a science-fiction adventure novel set on Exolonn, a barren desert planet. Organic androids called antpods have crashed their ship on Exolonn. As a kind they collectively lost their memory of their past. Exolonn is a new start for antpod kind. 97 years later they have already built their own society.

The story is about Mase, a female antpod. She is isolated, confused, and is detached from her kind. She possesses many traits of Asperger Syndrome/autism. One day she witnesses a massacre outside of her apartment. The event prompts her to work with her family and fellow antpods in order to survive the battleground that society is becoming. She soon discovers that she is no ordinary antpod.

My next published work will be a heroic fantasy called Roc Isle: The Descent. It will have many medieval elements in. Expect sorcery and battles! Here is a teaser:

Ankah is a Knight Prentice. He is the strongest, fastest, and most determined Knight Prentice to have lived. For Ankah has been marked by spiritual forces. His physical muscle and his rage make him think he needs a destiny. But he is stuck as the oldest Knight Prentice sworn to Lord Edwin. While others have been ordained as Knights, he has been left to train the new Knight Prentices. However, one thing preoccupies Ankah’s mind more than anything else, and that is The Championship of Knights Melee, which he has been selected by Lord Edwin to fight in order to represent Burgen Estate.

A greater sense of purpose is what Ankah needs. But he will need to unleash a lot more rage and display much better swordsmanship if he is to be prepared for The Descent. From the North comes an invasion. The Azure-Cloud Clan ruled by Lord Azure is invading in response to the murder of Lord Azure’s parents and the burning of the Temple. The South must unite against this invasion to preserve the territorial boundaries of the clans and to defend peoples’ livelihoods.

But The Descent is not the insane, fanatical invasion it is believed to be. But only a titanic clash between clans and a monstrous release of sorcery and swords will reveal the truth. And alongside the truth for Roc Isle is the truth Ankah is still searching for … Who am I? And why do I want to fight?

The Antpod Faction is available from Amazon
Posted by Michael Brookes at 13:16