Film Review - War of the Worlds

I have to say that I enjoyed it this time more than the first time I watched it. It's still true that it pales in comparison to the book and isn't as much fun as Jeff Wayne's musical (which is great fun live), but as a film in its own right it was quite entertaining.

The film follows a similar path to the book, only set in modern America rather than Imperial era Britain. The parallels are the same. What the film does bring is some excellent set-pieces. It has a number of issues, but when watched as a purely visual experience it smoothes most of the problems over. Strangely Tom Cruise annoyed me the first time I watched it, but this time he suited the role he played. The little girl is an odd one, she acts well, but she always seems much older than she is, which sometimes makes me feel I'm watching a miniature adult.

As I say the visuals are pretty good, a few shots look a little wonky, but for the most part it's all good stuff. Although the addition of the battle with the Thunderchild would have been awesome, alas you only get some tanks and apache gunships, but the helplessness of the battle is well portrayed.

All in all, it's far from a great film, but it's not a bad one either. 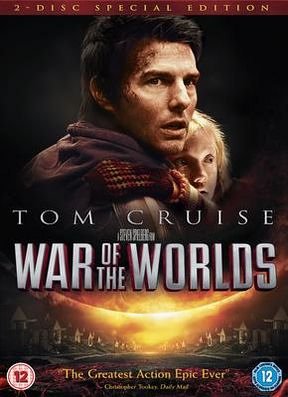 Big-budget adaptation of the classic science fiction novel by H.G. Wells, directed by Steven Spielberg. Divorced father of two Ray Ferrier (Tom Cruise) is looking after his children - uncommunicative Robbie (Justin Chatwin) and precocious Rachel (Dakota Fanning) - while his ex-wife Mary (Miranda Otto) goes to Boston for the weekend. After violent electrical storms start breaking out across the world, Ray goes to investigate the results of a lightning strike further down his block, only to witness a vast armoured machine break out of the ground and start laying waste to everything in its path. Fleeing New Jersey with his children, Ray begins a horrific journey through an America gripped by panic as the alien war machines start to systematically wipe out mankind. While the hot-headed Robbie soon leaves, determined to join in with whatever resistance is possible, Ray must get young Rachel to Boston to be with her mother. On the way he is forced to take shelter with paranoid survivor Ogilvy (Tim Robbins), whose gradual mental breakdown threatens to reveal the hidden family to the aliens nearby...

War of the Worlds is available from Amazon
Posted by Michael Brookes at 16:23