Guest Post - Should We Fear Contrast Dogma by Lex Allen

SHOULD WE FEAR CONTRAST DOGMA?
by Lex Allen

It’s important to know what contrast dogma is before making that all important “fight or flight” decision. The phrase, however, is not easily defined and when defined, not always understood.

By definition, contrast is to compare in order to show unlikeness or differences; note the opposite natures, purposes, etc., of whatever the subject might be. Dogma is a specific tenet or doctrine authoritatively passed down, as by a church. So, contrast dogma would be a comparison of differences in the doctrine of a church and alternative doctrine or concepts. The question that begs an answer is; should we fear contrast dogma?

The answer, like the definition, is not easily interpreted. For more than two thousand years, people all across the globe have been dominated by the dogma of the Catholic Church; that of the omniscient and vengeful God. A God who, throughout the stories of the Bible’s Old Testament, incited war, famine, genocide, incest and an innumerable amount of iniquities upon his own creations. Not only is such a God worthy of complete and paralyzing fear; the Catholic Church dogma demands that He be feared!

This Jesus… whose name is really Eloah… comes from a parallel universe (not the womb of a virgin). He says that an omniscient God does not exist, nor is there a place called Heaven and another called Hell. He claims that the spiritual energy of all people is immortal (no confession or church affiliation required), and that morality and ethical behavior is instilled within the spirit, and passed on to each and every human physical life.

Eloah (Jesus) is a human being from a society that is technologically and sociologically advanced. His sole purpose is to do good deeds, and to teach others how to live harmoniously throughout all of the multiverses. Eloah and all that he represents is the walking, talking contrast dogma to the Catholic Church and all other monotheist religions.

Would you be afraid of a man like Eloah… of contrast dogma? Not likely. On the other hand, the omniscient God that dominates the religious beliefs of Christians, Islamists and Jews has often been characterized as a fractious God. He has been described as loving and gentle one moment, and extremely vicious the next. If He existed, I would be very afraid of this God, wouldn’t you?

Although I’ve no proof, it is said that Stephen King appointed himself the Master of Horror. So, it is that a close associate to a professional partner of mine, after reading the first novel in the Imagine Trilogy, labeled me, Master of Contrast Dogma.

I like it, although most people simply scratch their heads and walk away whenever I try to explain it to them. That’s okay… not every new idea or phrase becomes an overnight success; sometimes it takes a week, a few months or even years. Whether or not contrast dogma ever becomes a household phrase, or even a new fiction book genre, is not the question. The original question was should we be afraid of contrast dogma? You tell me. Born in San Marcos, Texas, Lex Allen was raised in the Bible Belt towns of Corpus Christi and Austin. At the age of 17 he began an extensive military career with the U.S. Army. The Army took him to Germany where he met his wife, raised a family, and remained after he redirected his career into a civil service position with the U.S Department of Defense. During this time Lex also wrote, performed, and published fourteen songs with MCP Records in Austria that led to accolades from the European Country Music Association as “Best Band and Best Album” in 1997. In 2012 he left his civil service career to pursue his passion for writing – this time trading the 12-note musical scale for the 26-character alphabet. He has since published the first two books in The Imagine Trilogy in addition to an anthology of horror stories, “Lovably Dead”, published under the pseudonym Alex Eldrich.

Lex’s views began to take shape in a stereotypical Southern Baptist home in the Bible Belt of America. An astute and eager student, he studied alternative views on spirituality and quickly became disenfranchised with the organized religion he was presented with at home. A lifetime of contemplation and over a decade of intense research into the history of Christianity, alternative spiritual philosophy, and quantum physics provided the foundation for The Imagine Trilogy. Allen has used his research and personal spiritual journey to sculpt a work of fiction that presents a thoughtful and plausible alternative dogma and religious conspiracy in a fast-paced, thriller format.

Lex currently resides with his wife of 30 years in a century old Bauernhaus in Germany where he spends his days feverishly writing the anticipated conclusion to The Imagine Trilogy, “No Religion”, scheduled for publication in late 2013. About No Heaven: 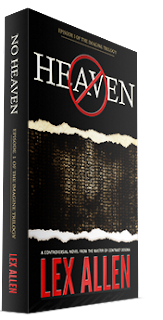 The first time He walked our Earth, He came to teach people the way to inner peace and everlasting life without fear of death or oppression by those with religious or political power. He failed.

In the streets of Germany, a mysterious man appears proclaiming himself to be Jesus. In the middle of the afternoon mass in Kölner Dom, this man shocks the masses with unfathomable healings and miracles. However, this Jesus is different from the stories and age-old traditions. He claims to have returned to Earth to save the human race from impending nuclear war and rebukes the religion sculpted around his name.

With the help of the skeptic blogger Jack Schmidt, university film student Kate Barrow, and theology professor Dr. Beth Washburn, Jesus races to save the world’s fate as political and religious forces attempt to stop him at every turn. Here's a link to listen to or read a sample chapter:

No Heaven is available from Amazon

The scavenger hunt code for this post is "Contrast Dogma". Visit all four blog tour stops to collect each code word, then visit www.lexallen.com/scavenger-hunt for a chance to win prizes!
Posted by Unknown at 00:30