Deja Vu is a thriller about a terrorist attack that blows up a ferry filled with a Navy crew. Denzel Washington plays an ATF agent who helps the investigation. He's invited to join a special team that has the technology to view into a fixed point in the past.

It's an interesting premise and while it follows the laid out path it's an excellent watch. Denzel Washington is always fun in action, the support cast less so, but they're not too detracting. The bad guy was interesting (I enjoyed watching him in Person of Interest), I would have liked to have seen more of him in the film.

The film starts well, but unfortunately loses it's way near the end. To be blunt it goes all Hollywood, which kind of spoils it the good work from the beginning. I didn't mind the intent, but they should have tried to follow the parameters they'd explained earlier on. It would have been more difficult to accomplish, but would have made a more interesting story.

Overall it's not a bad film, in fact it's quite an entertaining watch, but it could have been so much better. 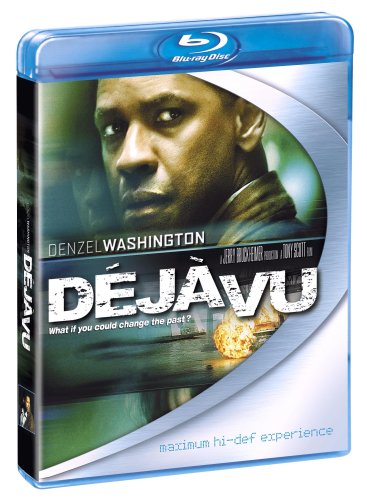 When a ferry filled with crewmen from the USS Nimitz and their families is blown up in New Orleans, Federal Agent Doug Carlin is brought in to help with the investigation. He becomes attached to an experimental FBI surveillance unit that uses space-folding technology to look back a little over four days into the past. While tracking down the bomber Carlin gets an idea in his head: could they use the device to actually travel back in time and not only prevent the bombing but also the murder of a local woman whose truck was used in the atrocity?

Deja Vu is available from Amazon
Posted by Michael Brookes at 15:45