The Brood is a classsic horror movie from David Cronenburg. I remember watching it many years ago and it was great to watch it again with older eyes. It tells the story of a woman being treated for rage in a mysterious therapy centre (run by the wonderful Oliver Reed, who is excellent in this film). The targets of her rage are killed by strange childlike creatures.

There's an old internet meme about how many children a grown man can battle in one go and this film is bold enough to answer that question long before it ever became a meme :-)

Humour aside this is quite a disturbing film, it does show it's age with the effects and the performances being over the top compared to modern films, but that works for me as it heightens the drama. The pacing is good and the ending is suitably climatic.

That being said some of the scenes with the brood attacking do appear almost comical, which takes some of the sting away. For it's time they were shocking, but these days we've all seen far worse.

I think that it deserves it's classic status and when watching it see past some of what has aged it and watch with more innocent eyes, because this is quite a disturbing story. 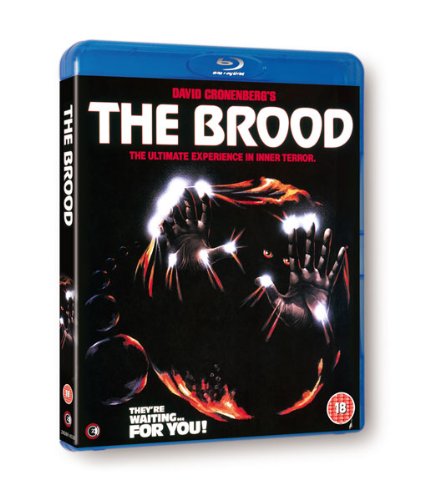 The Brood is one of director David Cronenberg's most chilling and disturbing works, as shocking today as it was when originally released.

Frank Carveth is becoming increasingly concerned about his ex-wife Nola's secretive treatment at the sinister 'Somafree Institute of Psychoplasmics'. Headed by cult figure Dr Raglan, his controversial and extreme methods seek to unleash his patients rage which take on physical manifestations.

As Nola's increasingly psychoticanger is vented during her sessions, brutal murders befall those at whom it's directed. When Frank's daughter is abducted he is led to Raglan's Insitute and a terrifying, repellant final confrontation, renowned as one of the most notorious scenes in horror cinema.
The Brood is available from Amazon
Posted by Unknown at 10:46