After rocking it out with Metallica's 'One' last week we calm things down a little with this week's Thursday Tune. Today I feature 'Ruska' by Apocalyptica (who interestingly have some fine instrumental covers of some of Metallica's songs), find out more below:


Today's song is one that comes from the heart, it's an instrumental piece of beautiful composition that for me is one of the saddest tunes I have in my collection - and for someone that listens to a lot of down beat music that is saying quite a bit!

The band themselves are noted for their artistry with the cello and that is evident in this song, forms the prominent voices that sing a song without any lyrics. That might seem like a daft statement, but it's what I hear when I listen to it.

The backbone of the song comes from the piano melody that is very reminscent of similar pieces used in horror films (Halloween and The Excorcist spring to mind) that provides some tension as well as movement to the pice. When overlaid with the mournful strings it's a beautiful and moving piece of music.

The band formed in 1993 when four classicaly trained cellists got together to play Metallica covers, I only discovered them relatively recently through some YouTube browsing a few years ago. Their focus has always been instrumentals and although they are described as a heavy metal band they bring a new voice to the genre even when covering other band's work.

They often team up with singers or musicians from other bands for non-instrumental songs and their list of guest musicians and vocalists is quite impressive including Max Cavalera and Til Linemann. You can visit the band's official website here to discover more about them: 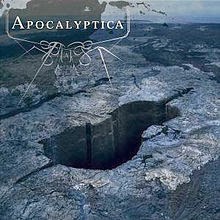 Ruska is from the self titled album 'Apocalyptica' which was released in 2006, it's an excellent album, as well as Ruska, Life Burns and Deathzone stands out as excellent tracks.

I've found this a great album to listen to while reading, maybe you will to!