I always look forward to reading the latest book from Terry Pratchett, especially from the Discworld series. It's true that they can vary in quality and some of the later ones don't stand out as much as some of the earlier books (Small Gods and Reaper Man in particular), but they are always worth a read.

This latest in the series sees railways coming to the Discworld thanks to an earnest young engineer called Simnel who with Harry King and Moist Ludwig develop the railway from Ankh-Morpok. Like all of the discworld books this is a blend of intrigue, social commentary and humour. The goblins in particular are a fun addition to the series and add some interesting conundrums to the social issues of the world.

Delving deeper into the world of the dwarves was also interesting as was seeing the very slick Ludwig in action. The book does have a few issues though, the first is that while Pratchett creates interesting characters in this book there seemed to be a few cameos almost just for the sake of them, most of the characters from his recent books make an appearance and it generates a bit of a confused feel to the story. The other issue was the balance of the story, again like the recent books it weighs more heavily with the social commentary at the expense of the humour, it's still fun to read but far from his best. 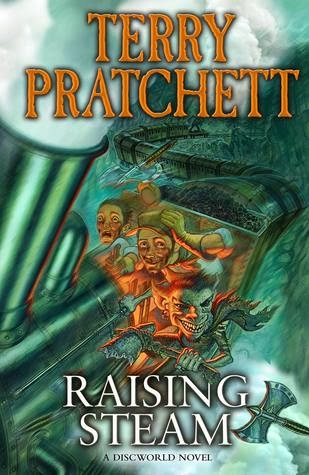 To the consternation of the patrician, Lord Vetinari, a new invention has arrived in Ankh-Morpork - a great clanging monster of a machine that harnesses the power of all the elements: earth, air, fire and water. This being Ankh-Morpork, it's soon drawing astonished crowds, some of whom caught the zeitgeist early and arrive armed with notepads and very sensible rainwear.

Moist von Lipwig is not a man who enjoys hard work - as master of the Post Office, the Mint and the Royal Bank his input is, of course, vital... but largely dependent on words, which are fortunately not very heavy and don't always need greasing. However, he does enjoy being alive, which makes a new job offer from Vetinari hard to refuse...

Steam is rising over Discworld, driven by Mister Simnel, the man wi' t'flat cap and sliding rule who has an interesting arrangement with the sine and cosine. Moist will have to grapple with gallons of grease, goblins, a fat controller with a history of throwing employees down the stairs and some very angry dwarfs if he's going to stop it all going off the rails...

Click here to purchase Raising Steam from Amazon (and it's a fun read)
Posted by Michael Brookes at 09:11