Book Impressions - The Dulwich Horror of 1927 by David Hambling

Unfortunately this book no longer seems to be available from Amazon, which is a shame as this is quite a fun Lovecraft inspired tale from London in the 1920's. We have a group of young people who consider themselves on the forefront of thinking and decide to investigate pagan worship in London. They investigate a particular place that leads them to a discovery of ancient evil.

While it's very reminiscent of Lovecraft's stories, it isn't as dense in the language which makes it an easier read, but doesn't quite match up with the source. Still it is a very fun story and does invoke the attitudes and circumstances of the time. The story's progression also feels very Lovecraft with the clever group only realising too late what they have become involved in.

The horror itself is also well done, building from a seemingly innocuous start and building into a horror of cosmological proportions. I enjoyed reading this a lot and I hope that the author decides to re-release it at some stage so more people can enjoy it. 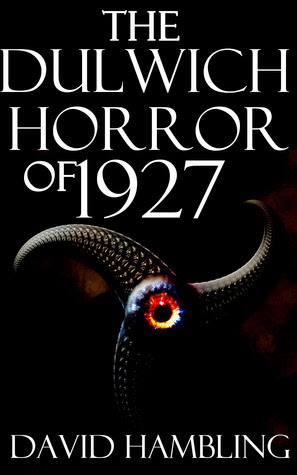 When a group of carefree young people encounter remnants of pagan worship at a South London church, it starts off as an amusing lark. To William Blake and his friends, the mystery of an underground chamber where no chamber should exist is an adventure to punctuate their round of champagne picnics and cocktail parties.

But something dark and alien is seeping into this bright world, and shadows from the distant past are rising over Blake's glittering future. The church's congregation are being preyed on, body and soul. A deserted house reveals a disturbing secret. An unnatural and insatiable creature is lurking, madness is afoot...and a whirlwind of chaos and destruction is about to be unleashed from another dimension

Blake and his resourceful friends know archaeology, photography, esoteric lore and even non-Euclidean geometry. But can they even begin to understand the eldritch evil they are facing in time? Can they solve the riddle that lies behind the words Cthulu Fthagn before they are picked off one by one?

An HP Lovecraft-inspired novella of madness and chaos to appeal to anyone familiar with the Cthulhu Mythos, and is sure to delight new readers and seasoned fans of the Call of Cthulhu alike.

This book no longer appears to be on Amazon, so here's the Goodreads link:  https://www.goodreads.com/book/show/18398458-the-dulwich-horror-of-1927
Posted by Michael Brookes at 13:26