Thursday Tune - One by Metallica

After watching Metallica's new movie 'Throught the Never' at the weekend (you can read my review here) I knew that I'd be featuring a Metallica song this week, the tricky question was which one...


I've been a Metallica fan for many year and like most of my favourite bands picking a single song is a tricky task, for me two songs really stand out from their many albums, Welcome Home Sanitarium and One. I've picked one as it shows what as musicians the band do best.

The song is inspired by a film called 'Jonny Got His Gun' a sad tale about a young man shipped overseas to fight in the trenches of the first World War,  he is horrifically injuted and is paralysed from the neck down so can only communicate by nodding his head as morse code. The film is well worth a watch and this song is an excellent adaptation that communicates the core message effectively.

As I've already mentioned One really shows the band's strengths, you have the rapid and pounding drumwork (nicely in time with the morse code in places), scorching guitars and James Hetfield's vocals. However they also have their melodic side and that is amply represented here. The almost genntle intro leads you straight into the song and for me ranks as one the best beginnings to a song ever.

I first started listening to Metallica back in the late eighties and they were my first real introduction to thrash metal, back then you had the big five - Metallica, Slayer, Anthrax, Megadeth and Suicidal Tendencies. They were all great bands but none of them quite realised the success that Metallica did.

I'll confess that I stopped following them after the Black album, their newer work just didn't grab me as much as their older albums, but there's still some great songs in the later albums.

I was fortunate enough to see them live during the And Justice tour back in 1989 and I have to say that as a live band they are fantastic and having watched through the Never their stage show has evolved into something quite spectacular. 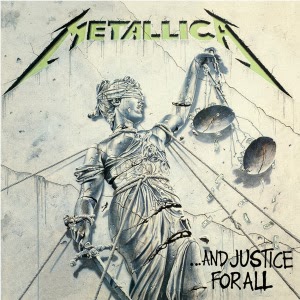 Picking a single album of Metallica's as their best is much harder than simply picking a song, so I won't even try! However this is without doubt a superb album, with One, Blackened, And Justice and the rest of the tracks it's a great listen from start to finish. The 10 minute long instrumental To Live is to Die is also a superb piece of music.

An excellent album that I still listen to a lot after all these years - great stuff!

Posted by Michael Brookes at 13:28