Film Review - Hell in the Pacific

This is an excellent film that to my shame I've only just got round to watching. An American pilot and a Japanese Navy officer are stranded on an island during World War II. Naturally their first instinct is to continue the war, but to survive they are better off working together.

With just the two leads on camera throughout the film its success relies on their performances and they both perform an amazing job with their roles. This is even more impressive when you consider the language and cultural barriers they face. On top of this they have to overcome their natural animosity as well as the challenges they face to survive.

It's quite a slow paced film, but the story is interesting throughout and as I've already mentioned, the two leads really carry it. The only downside isn't something I normally comment on, the transfer isn't great and the aspect ratio has been reduced to 4:3. From what I've read this reduces the impact of some of the scenes, although in fairness I still enjoyed watching it and I'd recommend it especially to Enemy Mine fans so they can see how it should be done :-) 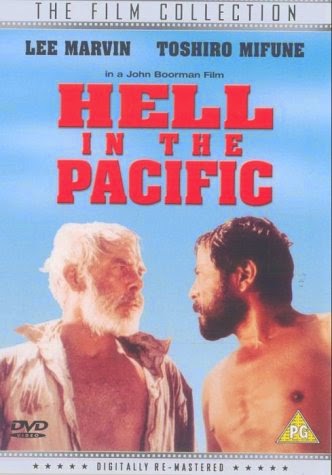 A US Marine pilot (Lee Marvin) and a Japanese Naval officer (Toshiro Mifune) find themselves marooned on the same island in the middle of World War II. The pair's first impulse is to continue the wartime struggle and engage each other in a battle to the death, but they soon realise that their chances for survival will be much stronger if they work together. Can they suspend their mutual hatred long enough to begin the struggle against the hostile island environment or will their wish to destroy each other win out? John Boorman directs.

Click here to purchase Hell in the Pacific from Amazon (and it's an excellent watch)
Posted by Michael Brookes at 14:34