Welcome to the very first post of the Mega-Dark Book Blog tour, throughout August myself and five other dark fiction authors will be posting on each others blogs about ourselves, our books and dark fiction generally.

The first post is provided by Jess Hanna and he starts the tour by introducing himself, very civilised! 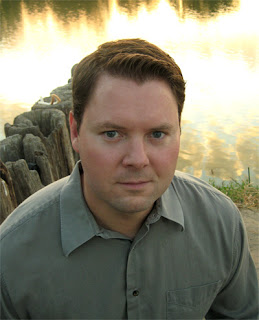 For my first Mega Dark Blog Tour post, I thought I would talk a little bit about where I came from, when I first knew I wanted to be a storyteller, and the origins of my fascination with the supernatural. I would like to give a big thanks to Michael Brookes for hosting me on his blog.

My name is Jess Hanna. Not Jessie, Jesse, Jessy, or any other variation. As I am known to say, "It's just Jess." It's a little like saying, "Oh, it's Hoggle." (Labyrinth reference) But my Grandmother was allowed to call me Jesser.

I was born in Traverse City, a small sized town in Northern Lower Michigan, but grew up about 15 miles away on the outskirts of the small village of Kingsley. Think Stephen King small. Maybe smaller. And yes, it's everything a small town can be. It has down homey charm, fierce community loyalty, and dark secrets that haunt most places.

I knew from the third grade that I wanted to write. I enjoyed reading and was naturally drawn to stories about the supernatural, fascinated by the idea that something else may exist in a dimension that is invisible to human eyes. So, I would create strange little worlds with magic and creatures great and small that had something to say to the humans they interacted with. Most of them are really bizarre as only an elementary school child could create, and perhaps someday I will share them.

As I entered the seventh grade, we moved into an apartment in the city where I was born, and I suddenly thought I was metropolitan. At that time, it was the biggest city I knew and the prospect of living 'in town' excited me. My obsession with the supernatural continued throughout middle and high school. When I was 15 years old, I attended a youth group and got saved. I had always believed in the God of the bible, but He did not become real to me until that moment. The scales of spiritual blindness fell away from my eyes and I truly saw the world as it really was. The supernatural things that had previously fascinated me became taboo and I started to explore what they really meant.

What happened next? Find out at my next stop on the Mega Dark Blog Tour with Patrick Todoroff.

Check out my website for more about me and my writing.

Click on the images to purchase
Posted by Michael Brookes at 00:30