Back in Januiary I first interviewed Scott Marlowe, you can read his original interview here. I have recently caught up with him, you can read what he has been up to since then below: 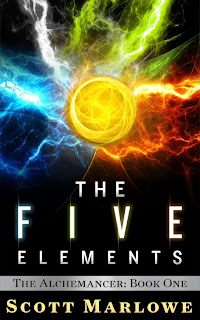 What has changed in your life since we last spoke?
I won the lottery! I'm actually typing this while sitting on a white, sandy beach in St. Croix. My biggest challenge of the day is keeping this pina colada from spilling! OK, just kidding. I don't play the lottery, so not much chance of that particular fantasy coming true.

I've actually been so busy I'm not even sure what all has changed. But, let's see... I released the first two (and only, for now) short stories in my "Assassin Without a Name" series. Those are available on Amazon, BN, Kobo, and Smashwords. The first short, "Fine Wine", is free across all retailers. "Killing the Dead", the second in the series, is not free, but pretty cheap.

Also, I've been working toward re-releasing one of my fantasy novels, "The Hall of the Wood". It's an official second edition. New cover, new round of editing and proofreading, and additional content at the end to help round it out a bit. "The Hall of the Wood" should be out end of July. It's being read by the final gatekeeper now (my wife).

Oh, and book one in The Alchemancer series is getting a new cover as shown. Spectacular, isn't it? I felt the existing cover was looking a little stale, so wanted to take it up a notch. And, since book 2 is about to come out, I wanted the two tied together a little better.

Which leads into "The Nullification Engine", which is the second book in The Alchemancer series. I completed the first draft and so now I'm going through my own editing. Then it's off to my editor and for final proofing. It should be out around October 2013.

Have you learnt any new wisdom?
Lots. Most of it centering around the process involved in producing and releasing content. Everything from the "best" way to write to having multiple sets of eyes to do final proofing. I've made some great, new relationships with cover artists, editors, and proofreaders along the way, too, so it's been good all around.

As for how… I've learned to keep the narrative in the moment and not to jump out to the 3rd person, omniscient viewpoint so much. I tended to write long paragraphs of characters wondering about things or describing scenery. You'll see those diminish greatly in my latest book. The biggest plus out of this is that I wrote the book much quicker and didn't spend time trying to piece together the "perfect" description.

What are you working on at the moment?
I just completed 'editing the editor', so to speak, meaning I went through all of my editor's changes on "The Hall of the Wood" and pieced the final edition together. Also, I'm doing initial editing on "The Nullification Engine", which is the next book in The Alchemancer series.

Tell us about your latest release and how we can find out more.
My latest release is not quite latest (it should be out October 2013) yet, but it's "The Nullification Engine". Continuing right where "The Five Elements" left off, our characters find the chaos caused by Shanna has had ripple effects elsewhere and that Erlek and the elementalists are not done with Aaron. Also, Ensel Rhe's past catches up to him in a big way as he encounters one of his worst enemies. This particular individual arrives with none other than Ensel Rhe's daughter, Jakinda Rhe. The entire novel takes place inside one city, which will be the setting for this book and at least one other. It's a colorful place, up there with Lankhmar or Sanctuary, I think. I had a map done of it and the surrounding area by the same artist who did the maps for my other novels. They came out really nice. I'm really looking forward to getting the book out there for people to read.

Posted by Michael Brookes at 13:16