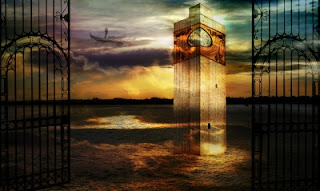 Jason Purdy won the third place prize in July's monthly short fiction contest with his story 'Backwards'. The new competition for September will be posted tomorrow, so you only have one day left if you want to enter August's competition.

I only knew something was wrong because of the numbers on the clock. The old, eternal grandfather in the hallway, chiming every half an hour, on the dot. If any of my friends stayed over, it would always keep them up, but I could snooze through it, no problem. It was background noise to my sister and me now. Just like the endless pissing matches between mum and dad. I used to wish myself away, with every fibre of my being, until my body screamed for it, until I thought I might just burst into flames and disappear forever, leaving nothing but my smoking shoes in the hallway, with a small pile of ashes in each one, like little mice turds.

Except one night, I got up to piss, and I was gone. Everything was different, but the same at the same time. Like if you stare in the mirror long enough in the dark. You know it’s you, but that doesn’t look like your smile, and don’t you feel just a little too close? Like the thing on the other side of the mirror could reach out and grab you, if it wanted to? Then you can’t turn around, because once you show it your back, it’ll grab you by your shaggy hair and pull you into the mirror, and then you’re gone forever.

Well I was gone. The numbers on the clock were backwards. I’d seen novelty clocks like that before, but there wasn’t anything funny about this one. I stood in the hallway, my eyes locked on the clock, feeling a profound sense of wrong tickling down my spine, feeling piddle trickle down my leg at the same time. Two sensations, freezing cold and searing hot, and that was when the claw grabbed me by my matted hair and pulled me into the linen closet. I tried to scream, but there was nothing more than a squeak, like air escaping a balloon.

‘Shut up.’ a voice tickles my ear with putrid breath. I don’t recognise it. That might be because it’s far too familiar. I’ve never heard it from this side. Recordings don’t do it justice. Hearing your voice when it reverbs down the phone back at you isn’t the real deal. That tape of that debate competition I won that has pride of place under the TV, that’s not real. This is my voice, right in my ear. Harsh, nasally, on the verge of breaking. My dad tells me I’ll be a man soon. If that makes me anything like him, I’m in no hurry for it.

‘You wished. You fell through.’ he says, as if that explains it all. I guess it does.

Posted by Michael Brookes at 12:06