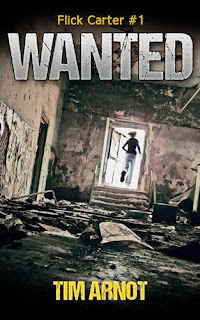 Why I wrote it:
One thing you can't help notice about apocalyptic and post-apocalyptic fiction is that it always seems to be set during or immediately after the event and amid massive turmoil. To my mind that's been done to death and doesn't really interest me. Far more interesting to my mind is what comes later, 100 or 200 years down the road. I guess you could call it Post-Post-Apocalyptic. In Wanted, we don't get to find out what caused the apocalypse - it was 150 years ago, and everyone has got over it. They just refer to it as "The Collapse." A new, much smaller, much changed civilisation has sprung up, and people are pretty much getting on with it as best they can. Instead, the story focuses on the characters, the drama, corruption and how far people will go to get what they want, for good or bad.

WANTED came about when I went to see The Hunger Games at the cinema with some mates. In the pub afterwards, I rather stupidly said "I could write something like that" (or words to that effect), and one mate responded, "Go on then." Well, the challenge was on, so what else could I do?

Flick Carter:
Flick, the heroine of the book has her own blog, in which she talks about her experiences as a "book actress" and generally lets fame go to her head. I'm told she does appearances for children's parties (imaginary), although I'm not quite sure whether that's imaginary appearances for real children or real appearances for imaginary children. She was last seen on a beach in Cannes muttering something about "needing more bling." You can follow her (and gain some "behind the scenes" insights into the books too) on the usual social media sites:

Reviews from Amazon and Goodreads:
Andy Barrett - Set in a future where technology, and even electricity, are forgotten luxuries of an old past, where people are surrounded by skeletons of the long-dead Information Age, Wanted is set in what might be described as a reborn civilisation where skill and ingenuity are needed to thrive.

What's not new in this future, are politics and corruption. Tim has drawn them superbly; and to counter the bad is an expertly created good. The people of Faringdon get by well enough, they have their Watch to protect them at the city gates, but not all evil exists outside them.

This is a wonderfully written story featuring characters like Flick who you take to immediately, and others like Dixon who you might approach with some caution. And then there's the Mayor - a man you wouldn't approach at all!

I loved this world, and I wouldn't mind living in it. With that in mind, I wait eagerly for the second of Tim's books.

Lily (The Novel Nerd) - I absolutely ADORED the idea of having horse drawn classic cars, in fact I want to own one of these myself!

I was also head over heels for Flick. Its very rare I develop a relationship with the female protagonist, but Flick was just kick ass and awesome in every way! As a matter of fact, the characters were brought to life in such a way that you couldn’t help having strong emotional ties to almost each and every one of them. For example, the mayor: he was a character you just loved to hate; he was so damn vile and twisted.

About the Author
Tim Arnot lives in Oxfordshire and doesn't have any cats. Between bouts of "research" (aka messing about on the Internet), he is finishing off HUNTED, the next book in the Flick Carter series.
http://www.tim-arnot.com
https://www.facebook.com/TimArnotAuthor
https://twitter.com/timarnot/

Purchase Links
WANTED is available in paperback and ebook from Amazon, B&N, Kobo and iBooks. For August, the ebook is available at the reduced price of £1.99 / $2.99.