This is the second book in the Smelly Trolls series, I read the first book some time ago and enjoyed it and this continued the fun. Mr Splendiferous is a mad scientist who owns a science park. This is no ordinary science park, but is a theme park based around crazy (and fun) science. He has captured and is studying a troll when Rufus and his classmates go on a school trip to the science park.

I think it's fair to say that this book isn't aimed at me, but that doesn't matter as it's a lot of fun to read. The story is straight forward and full of humour. It's not only humour that appeals to young children, but grown up ones like me :-)

You also learn important facts about trolls, for example little girls taste better than little boys. So if you're ever attacked by a troll, as long as you can run faster than a neaby little girl you'll be fine.

As well as being an entertaining story the illustrations deserve a mention. Quite simply they're great and add a lot to the book. It's suitable for older children to read alone, but where it would be best is reading aloud to kids. There's so much oppoertunity for silly voices and fun acting that it would be a sure fire hit with them.

In summary this is a lot of fun for kids young and old alike. If you're looking for an enjoyable read for your youngsters in the summer holidays then this is for you. 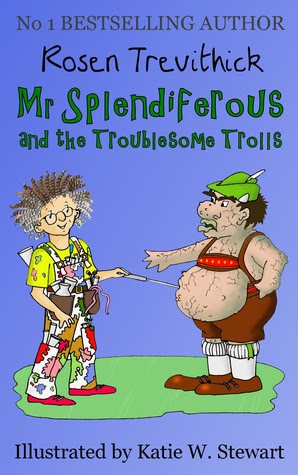 Rufus Sebbleford and his friends are looking forward to a school trip to the Mr Splendiferous Science Park unaware that the mad scientist is keeping a dangerous troll locked up in the grounds.
The scientist's obsession with trolls causes further problems for the Super-Troll-Knobbly-Foot family who are trying desperately to pass as humans.

Meanwhile, the stinky trolls of Gloopyglen Babblebrook begin digging a tunnel under the science park in search of a new bigger cave for their expanding bellies.

Before long, the children find themselves trapped as the park becomes swamped with revolting trolls. Rufus, Bruno and Polly must come up with a plan before their classmates become troll food.

Mr Splendiferous and the Troublesome Trolls is book 2 in the Smelly Troll series. You don't need to read the books in order but it helps.

Mr Splendiferous is available from Amazon
Posted by Michael Brookes at 08:31