For the final guest author interview of the week we welcome Shams Uddin to the hot seat, you can read what he has to say below: 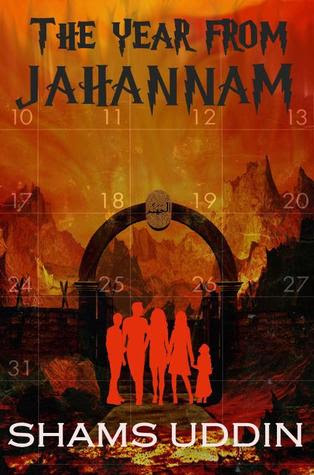 Please introduce yourself, who are you and what do you do?
Over the past two decades, I have forged a highly successful career in Software Development. I have managed some very creative and technically proficient developers to deliver business critical applications for the Media industry in the UK.

What first inspired you to start writing?
In April 2008, I suffered what I considered to be the week from hell. My father was seriously ill in Hospital; I had a sporting accident; our home was broken into and our new car was stolen and to top it all our family suffered a tremendous personal loss.

For several years after this week, I still was having nightmares about what had happened. I wanted to share my feelings and experience with as many people as possible and this inspired me to start writing.

I felt that what I had suffered was not unique and that so many people would have experienced the same. What if this was not a series of unfortunate accidents? What if there was a supernatural force that was causing these events? How would someone cope? What could they possibly do to make it stop?

It was these sentiments that eventually led to my writing “The Year from Jahannam”, where a family suffer the worst nightmare ever and find themselves with no way to fight back against what has been happening to them.

If you could work with any author, who would it be and why?
I admire many writers and enjoy the variety of styles they employ. I am sure I can learn so much from almost every author.

I tend to write with reference to my own experiences and feelings, so I am not sure that really lends itself to collaboration.

What do you find most rewarding about writing?
Like most writers, I want to shock, amuse, excite and entertain my readers. I want to open their minds to possibilities they have not considered and inspire them to stand up to injustices wherever they find them.

And the most challenging?
I am always looking for ways to do something that has not been done before. That is why I adopted a family blog format for “The Year from Jahannam”. It allowed me to explore firsthand how the horrific events were affecting each member of the family.

What attracted you to the paranormal?
I grew up listening to stories about the paranormal. Many of the people I am close to, have experienced something that cannot be explained. Most of these stories have involved Jinn’s. These are supernatural beings from another dimension that have their own societies. I wanted to share some of these stories with a Western audience who are mostly unfamiliar with the Jinn.

If you could turn any book into a film, which would it be?
I would like to see “Mother of the Believers” by Kamran Pasha turned into a film.
It is an amazing story of the life of an extraordinary historical figure that most people in the world have not even heard of.

However due the highly controversial nature of this subject matter and the emotional reaction it will engender, I cannot see this ever being made.

What are you working on at the moment?
I am working on “The Glass Bastion”, which explores the subject of racism and prejudice in the British corporate workplace. So many traditional British companies do not have any board members that are from ethnic backgrounds.

The Glass Bastion explores the story of Adam Ramsey, who despite being the best candidate for a position on the board, is judiciously blocked from gaining this role by one of his senior colleagues that he had trusted. Who has betrayed him and why? Is the colour of his skin and his religious beliefs the reason behind this?

Adam finds that the British boardroom is still a fortress that cannot be penetrated by someone from an ethnic minority. He finds that the days of the British empire, where the locals were encouraged to cooperate but to also to know their place, are still flourishing.

Tell us about your latest work and how we can find out more.
The Year from Jahannam is available to download from Kindle and can be purchased as a paperback from Amazon, Waterstones and other online bookshops.

You can explore the characters, read the news stories that are referenced, visit the celebrity websites that the characters like and even purchase the outfit that one of the characters wore from the book’s official website: www.yearfromjahannam.com

The Year from Jahannam is available from Amazon
Posted by Michael Brookes at 13:08