In this latest guest author interview I welcome Martyn V. Halm, author of the Amsterdam Assassin series, find out what he has to say below: 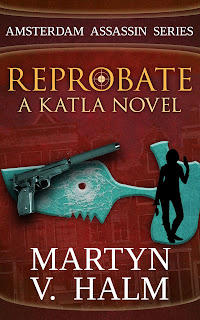 Please introduce yourself, who are you and what do you do?
I'm Martyn V. Halm, and I'm a professional liar. No, strike that. The professional part came later. I've always enjoyed telling grandiose stories. However, if you tell grandiose stories and people assume they're true before they find out that they're not, you will be labeled 'liar'. And I'm not. I'm a confabulator (from Latin confabulatus, past participle of confabulari, from com- + fabulari to talk, from fabula story), someone who fill gaps in memory with fabrications. A storyteller, not with the explicit intention to deceive, but to amuse. And because telling stories gives you a dry mouth and a limited audience, I decided to tell my stories through books. Because I like writing about criminal protagonists and I live in Amsterdam, I write the Amsterdam Assassin Series, about Katla Sieltjes, a female freelance assassin. The series features two books and three short stories at the moment, available in e-book only, although I'm thinking of Print-On-Demand versions to coincide with the publication of Rogue, the third novel, in November/December 2013

What first inspired you to start writing?
During a brief sojourn in unemployment and without the financial means to go out on the town, my friends and I told stories to amuse each other. My stories were praised and people told me I should write a book. Although I'm an avid reader, I didn't really like writing essays at school, so I nixed the idea, but it hovered around in the back of my mind.

A few years later while working long boring night shifts as a security officer, I would often spend six hours out of every eight-hour shift reading and studying. I had an idea for a story and started writing, first in Dutch, later in English. At first I wrote on a typewriter, but when I received my vacationing money, I spend it on an Apple Powerbook 150, which I carried everywhere. From that moment on, I took myself seriously as a writer. As I couldn't follow classes on writing crime fiction in Amsterdam, I bought self-help books for writers and became an autodidact.


And what was your first story?
Captain Smegma and the Tranny from the Sewer of Sorrows. Not fit for publication, but the few people who did read it enjoyed it. Although one snorted bleach to erase the images from his mind.
What drew you to writing about an assassin?
I've always enjoyed stories about assassins, but my opinion on assassins differed from the books I read. Since most fictional assassins are antagonists, they are often warped individuals, with freaky childhoods. However, I've come across mercenaries (basically the same field), who are pretty regular people. Sure their view of the world differs from ordinary citizens, but they're not 'warped'. This made me want to write about an assassin who has no deep-seated frustration or abused childhood, but who just realized that killing was what she was good at and who had the appropriate world view and lack of conscience to pull it off.

What do you enjoy most about writing?
Research. Writing crime fiction is no picknick, especially if you try to stick as close as possible to reality and your protagonist is a free-lance assassin, but it got easier after I killed my first target and I’m still improving. Apart from that I visited experts on the maintenance of saxophones, caring for macaws and repairing diesel engines; went to a shooting club to fire different handguns to get a feel for them; befriended hackers to explain to me how they scaled firewalls and extracted information from hospitals, police files and hotel registries; learned how to open locks with simple lockpicks; visited an institute for the blind, learned braille and walked around with my eyes taped shut for an entire day; smoked lots of doobie with Rastafarians; read countless books on obscure topics that might have a bearing on whatever I’m inclined to write about; befriended musicians so I could sit in on sessions; learned how to pick pockets; accompanied the police when they went to haul in a ‘water corpse’; rode motorcycles and Vespa motor scooters; and some other things I vowed to keep secret…

And the least?
Promotion. I'm a pretty social guy, but I don't really like to flog my work upon the unsuspecting public. Most of the time, you hope the quality of the writing will draw the readers in, but the readers have to notice you first, which gets hard with 350,000 books being published per year. There's a saying that people have to be reminded three times about something before they notice, so that makes it even more difficult to stick out. You want to tell people, 'Hey, just check out a free sample of my work', but even that is a major imposition on many people. The best thing to happen is that readers who love Reprobate recommend the Amsterdam Assassin Series to other readers. Every writer who talks about their books will be viewed with wariness, but personal recommendations by disinterested parties are the best advertisement you can wish for.

What advice would you give new and aspiring authors?
Your first draft is for yourself, to get the creative bit out of your mind in a tangible form. It will be a mess and unsuitable for reading, but that doesn't matter. After you get it all out, you can put on your Editor Cap and polish your work until it can be read without making the eyes bleed. Find people who have no reason to kiss your ass and ask their honest opinion. Take that opinion and improve your manuscript until it's fit for publication.

What are you working on at the moment?
Currently I'm working on Rogue, the third novel in the Amsterdam Assassin Series. Reprobate, the first novel, had been finished for a long time when it was published September 1st. I had about 50% of the rough draft of Peccadillo, the second novel, and in three and a half months I finished the novel, had my beta-readers go over it, made some changes based on their suggestions and published it December 15th, just before the Holiday Season. For Rogue I only had a few chapters, some 20,000 words, but most of that is no longer current or fitting with the series, so I'm rewriting those beginning chapters and adding material to the rough draft. In the meantime I'm also exploring material to add to the KillFiles, the short stories that I publish between the novels.


Tell us about your latest work and how we can find out more.
The last thing I published is Fundamental Error, the third Katla KillFile in the Amsterdam Assassin Series. As always, each book and short story can be read as a stand alone. Fundamental Error follows Katla Sieltjes, freelance assassin and corporate troubleshooter, on her most dangerous assignment yet. When Peter Brandt watches his brother Roel convert to Islam and turn into a domestic terrorist, Katla needs to enter into the mind of a fanatic suicide bomber in order to thwart a mass-murder attack in the shopping mecca of Amsterdam.

I also had the whole Amsterdam Assassin Series re-covered by cover artist Farah Evers, who did an excellent job of re-branding the series.

The Amsterdam Assassin Series is available on Amazon, iTunes (iPad), and Kobo.

For direct links and the latest news, please visit my blog http://amsterdamassassin.wordpress.com/ and/or my website http://tao-of-violence.weebly.com/