TO BE CONTINUED
by Devorah Fox

When I first wrote The Lost King, I didn’t have a series in mind but a funny thing happened on the way from the beginning to the ending. I got to the conclusion of the tale but not the story. Robin, the lost king, had learned a lot but still had a lot to learn. Readers recognized this because they asked me, “What happens next?” and “When’s the next book coming out?” I was pleased that readers so liked the characters that they wanted to spend more time with them.

It’s a dilemma that’s been tackled by writers of serial fiction with a lot more experience than I have so I turned for advice to Alesha Escobar, author of The Gray Tower Trilogy and Samantha Lafantasie, author of the Nepherium Novella series. I was told not to worry too much about boring readers of Book Two who have read Book One because they probably don’t recall every detail. Come to think of it, I wrote the book and I don’t recall every detail! In writing The King’s Ransom I had to do some rereading to refresh my memory. Now I know why some authors create “bibles” for themselves complete with character profiles, maps and timelines.

Spoiler avoidance also isn’t so much of a worry for the same reason. People reading the series in reverse aren’t likely to remember every word. Plot details revealed in one context will have a different impact in another. Besides, I see The Bewildering Adventures of King Bewilliam series as more character driven than plot driven, so having prior knowledge of certain plot developments doesn’t necessarily spoil enjoying the progress of the character arc. As a reader of serial fiction, I must admit that I don’t much recall the plot of any individual book. What I do carry from one book to the next is familiarity with the characters’ personalities and psychology. I enjoy watching characters learn, change and grow from book to book.

I was quite a way into writing The King’s Ransom when I realized that there would be at least one other book in the series. I started writing Book Two thinking it was going to be about certain characters and events. So much had to happen first, however, that by the time I covered all that, I had a whole other novel. While I didn’t deliberately leave loose ends to tie up in a third book, there is definitely yet more to the story so yes, there will be another book in the series. To be continued...

Devorah is also the author of The King's Ransom, find out more below: 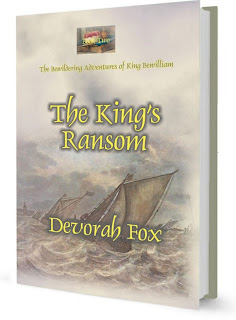 When those you have loved and lived for betray you, how do you go on? Book Two of "The Bewildering Adventures of King Bewilliam" finds Robin, the hero of The Lost King, at sea both literally and figuratively. At first directionless and purposeless, he determines to reunite with his sons and with them restore his shattered kingdom but Fate has different plans for the lost king. Driven far from his home in the Chalklands, Robin pits his will against a dragon, a fortress's duplicitous and deadly guards, high winds on the open water, and a horrifying sea monster only to meet his most formidable opponent.

Buy The King's Ransom now on Amazon
Posted by Michael Brookes at 11:54