I'll start by saying that this is an incredible book. Really I should just be able to say that and people will read it :-) Where to start? Well the story is of the Mariner, lost at sea in a world that has fractured into islands seperated by a vast ocean. The Mariner himself is not a nice character, in fact he indulges in terrible acts and fantasy's, but he's on a quest.

The journey he takes is fascinating and while I kind of figured what was going on it still kept me guessing to the end. The writing itself is superb, it really captures the confusion and perversion of the world the Mariner finds himself in.

On the note about perversion be warned this book does contain some extreme sex scenes, some of a violent nature. On the face of it the story is one of pysocho-sexual fantasy (not a good kind of fantasy), but lurking in the words is something a bit more profound.

As well as the Mariner there is a number of secondary charcters who all fit into the story nicely and provide a greater understanding of the world. The Tasmanian Devils are wonderful and add a bit of needed humour to often bleak world.

The conceit used is one I have encountered only once before, but it is presented much better in this book than my previous encounter (I won't reveal the exact nature as that would spoil the book!). Suffice to say that some thinking has gone on in how the story has been layered together.

As I said at the beginning this is an amazing book. 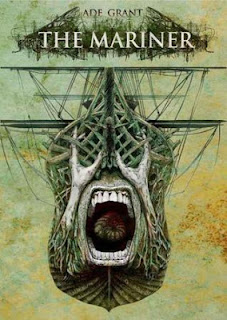 He awoke with a buzzing in his head, lost at sea…

Hidden amidst the fractured remains of a sunken world are the answers the Mariner craves. The ocean is endless and yet he has the tools for such a hunt; an antique slave ship infested with Tasmanian devils, a crate of semi-automatic weapons, and a dreamlike clue formed loosely in his mind. Sinister impulses, however, gnaw at his soul, unravelling his sanity; a proclivity for violence and a hunger for rape.

Surrounded by mindless zombies, flesh-eating eels and dangerous cults, this sadomasochist could be humanity’s last chance at unlocking the secrets of the crumbling universe. He’s a pervert, an addict and a monster, but might just hold the key to finding a route home…

Pioneering Ade Grant’s signature genre of pornographic philosophy, “The Mariner” weaves together atrophied concepts within a fragmented landscape, taking the reader on a journey through the bile-ridden gutter of the human psyche.

Buy The Mariner now from Amazom (you really should!)
Posted by Michael Brookes at 07:59