We have something a little different for this week's Tuesday Tease and that is an excerpt from Jonathan Hill's debut novel 'FAG'. I read this recently and it provided one of my reading highlights for the year. It's a fantastic read and a very emotional story - well worth checking out! 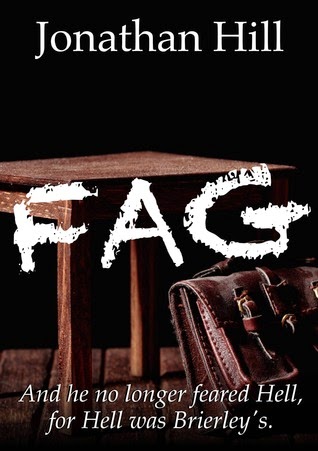 Hodges was in the staffroom, again for no apparent reason, but that didn’t matter to Gray right now. He was just relieved that the situation could now be shifted from his own sloping shoulders onto those of Hodges. Gray had once marvelled at the thought that Hodges would probably survive even a direct hit from a bomb, so hard was his exterior. It had occurred to him later on that it was perhaps no coincidence that the most likely survivors of an earth-shattering blast were, amongst other things, rats and cockroaches.

Grace was by the window, stirring a cup of coffee, her back to the room. Gray glanced at her briefly, some part of his mind acknowledging her presence for a fleeting moment, then paid her no further attention, as if she were an insignificant extra in a scene that would inevitably end up on the cutting room floor. One other member of staff was sitting, legs crossed, engrossed in a copy of The Times. Neither seemed to have heard his entrance or his first words. Either that or they just didn’t react, as if he were the insignificant extra.

Hodges turned. “John! You want a word already on the first day back? What have I done to deserve this?”

“I’m sorry, Headmaster, but I have something to report. Perhaps another time would be…” Gray regretted trying to back out the instant the words left his mouth. They had escaped without conscious thought.

“Nonsense, John. Out with it. That’s what I’m here for after all. Just so long as it doesn’t involve a lot of work on my part.” He half laughed without changing his expression.

Gray moved closer to Hodges and lowered his voice. “I have just seen a boy leaving one of the prefect dorm rooms… without a stitch of clothing upon his person.”

Hodges stifled a laugh. “What, nothing? He’d mislaid his clothes?”

“No, he had his clothes. He was carrying them. Well, apart from his underpants which were... which were on his head.”

“On his head,” Hodges repeated, a smile leaking out. Then he shrugged. “So what’s the issue then? You asked the boy what happened?”

“You questioned the prefects as to what the boy was doing naked in their room?” Hodges appeared to enjoy saying the word ‘naked’.

“No, I tried, but I thought that you ought…”

“John,” he said shaking his head. “You are one of the most brilliant teachers of classical languages that I have ever encountered, if not the most, but you can not just come running to me every time you encounter a little… hiccup. Or any time you need me to fight one of your battles. Where’s your own authority? Stand up to them, man.”

Gray started to reply, garbled his words, started again. “With the greatest respect, Headmaster, I wouldn’t class what I saw as a hiccup… so… what is to be done?”

“What is to be done, John? What is to be done? I don’t really see that anything needs to be done. Boys will be boys, you know that. It seems to me that a harmless prank took place and the boy got his clothes back in the end, so…”

Hodges’ face was unmoved. He frowned, inspecting every inch of Gray’s face before grabbing him by the arm and pulling him to one side. “Listen here, Gray,” he whispered with an aggression that was underlined by his use of surname as a means of address. The John of several moments earlier was long gone. “What is our school motto?”

Gray had been temporarily stunned into silence.

“Did you say something?” Hodges asked, despite the fact he patently hadn’t. “Come on, Gray, you out of all of us should know what that fine Latin motto is above our school gates.”

“Right. And what does that mean when translated into plain English?”

Hodges clenched his right fist and thrust the air between them both. “Precisely. These boys come here as boys and they leave as bloody strong men, Gray. They don’t get to be men by us pandering to them, wrapping them up in warm blankets and holding spoons to their mouths.” He pointed to the window, to where Grace had been standing, but Gray did not turn to follow his finger. There was something in Hodges’ face that bade him not to look away. He imagined it was the same look he had employed when convincing soldiers beneath him in the Great War to go out and blow themselves to bits. “It’s dog eat dog out there, Gray, and we are doing a disservice to our boys if we leave them with the impression it is anything other than that.”

Gray adjusted the knot of his tie, wishing he had not done it up quite so tightly before his mirror earlier that morning.

Hodges continued. “When I was in Belgium do you know what they did to cowards? To those too weak to go into battle tall, proud, strong?”

Gray knew. Unblinking, he looked at his superior, wondering whether he realised that he had told him this on at least two other occasions. He decided that he did know. Hodges wasn’t going senile. He was as sharp as they came and this speech was carefully-tuned ammunition from the armoury which he used to run his beloved school. He stayed silent. Hodges had put forward his question in such a way that he clearly intended to answer it himself. If Gray were to answer, he had the unnerving feeling it would be akin to loading a pistol with a bullet marked for the roof of his mouth.

Hodges allowed Gray not to answer for a few moments longer before continuing. “They shot them, Gray. They shot them.” He raised his eyebrows. “I have neither the time nor the tolerance for weakness in my school, Gray. Not amongst the pupils… not anywhere.”

Gray knew with sickening certainty that the final words were aimed squarely at him. He merely nodded.

Hodges stood back a pace and smiled. There was nothing remotely amicable in his expression. It was a parting smile, a smile that said the issue was over. Dead, buried. “Good,” he added before marching out of the staffroom, whistling as a gravedigger might at the end of his shift.

Gray turned to face an empty room. At some point, Grace and the other master had left.

Click here to buy FAG from Amazon US / Amazon UK (and it's an incredible read!)

Jonathan Hill burst onto the indie scene as an author in 2012 and has been entertaining readers with his fiction ever since.

After two years of writing short stories and novellas, he published his debut novel, FAG, a landmark in his writing career and, indeed, his life. The book, a stark insight into a 1930s boarding school for boys, is an exploration of important and strikingly relevant themes, some of which are intensely personal to the author himself.

The Maureen books, by contrast, are full of humour. The stories have received much praise, not only for their sheer entertainment value, but also for the way in which their comedy and poignancy are woven together.

His short stories cover a range of genres, from slapstick humour to chilling horror, via drama infused with emotion. He has published two eclectic collections and two 100-word fiction collections, one of which was written with his friend and fellow author, Kath Middleton.

Jonathan lives in Manchester, UK. He enjoys reading, photography and going to the theatre.