I remembered this being one of my favourite Gaiman's books but I enjoyed re-reading it even more than the memory of it. American Gods is still my favourite book of his but Neverwhere is a close second. It's an imaginative dark fantasy and I love the world of London below and the fantastical connections with the famous landmarks of London.

The story is a basic quest but it's the characters and the setting that elevates it. I liked the two assassins most of all - there's some twisted humour in their conversations. The central character provides a nice juxtaposition from the weirdness going on around him.

Story is king and that is as it should be. However Gaiman's prose in places is a joy to read. If you're a Gaiman fan then you've probably already read this - if you haven't then you're in for a treat. If you're new to his work then this is an excellent place to start. 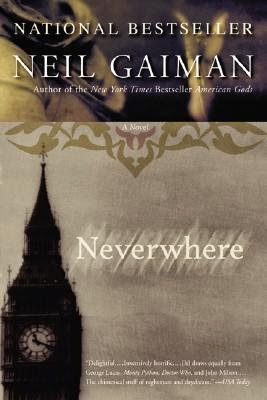 Under the streets of London there's a place most people could never even dream of. A city of monsters and saints, murderers and angels, knights in armour and pale girls in black velvet. This is the city of the people who have fallen between the cracks.

Richard Mayhew, a young businessman, is going to find out more than enough about this other London. A single act of kindness catapults him out of his workday existence and into a world that is at once eerily familiar and utterly bizarre. And a strange destiny awaits him down here, beneath his native city: Neverwhere.


Click here to buy Neverwhere from Amazon US / Amazon UK (and it's an amazing dark fantasy)
Posted by Michael Brookes at 10:21